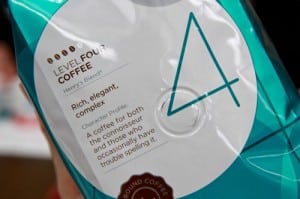 I stood for several minutes in the coffee aisle at our local grocery store.

Since I decided to bring my french press to work to counter the coffee that we have here, I knew I’d have to bring my own grounds. I couldn’t buy beans, unless I brought the old fashioned grinder that my mom just found on a garage sale, so it would have to be pre-ground.

I looked at the colorful bags. Starbucks was ten dollars. Joe was eight dollars. Leelanau was seven dollars. My eye spied Seattle’s Best for six dollars, decked in a pretty blue bag.

Rich, elegant, and complex. “I like that,” I thought to myself. It continued: A coffee for both the connoisseur and those who occasionally have trouble spelling it.

“Well gee whiz, I’m a connoisseur and I have trouble spelling it. This speaks to me right where I’m at.”

So I bought it, because I’m a case study in modern marketing.

Level Four Coffee is the next to last darkest roast Seattle’s Best produces. I am not a dark roast girl, but I didn’t think the four coffee beans on the bag had any significance beyond symmetry. Apparently, four coffee beans means level four. And level four is positively volcanic.

Even french pressed, the grounds were so bitter and ashy that I felt steam pouring out my ears. It smelled good – that earthy, spicy smell that I love so much – but drinking it was like slurping gasoline. “There must be a better way,” I gagged, wondering why anyone in civilized society would consciously choose to asphyxiate themselves, and pay to do it.

Although I guess I am one of those favored few.

I choose to think the best of Seattle, because they are known for their coffee, so I pressed on in my dark roast endeavors.

Pressed on. Get it? [Bahahahahahaa]

Yesterday I tried again, this time using a smaller ratio of grounds to water. With plenty of cream and honey it was drinkable; less like gasoline, with a twinge of kerosene and alcohol to it. I chalked it up to lack of tolerance and decided to try it again later.

By my third cup, I had perfected the dark roast by putting only two half tablespoons in to my 12 oz of boiling water and pressing it like the Mad Hatter at tea. Then, I poured in half a cow’s worth of cream and a hive of  honey. And it was good.

It’s going to be a long three months making up that six dollars, and next time, I think I’ll start with Level Two.