How to Break Up With Your Boyfriend 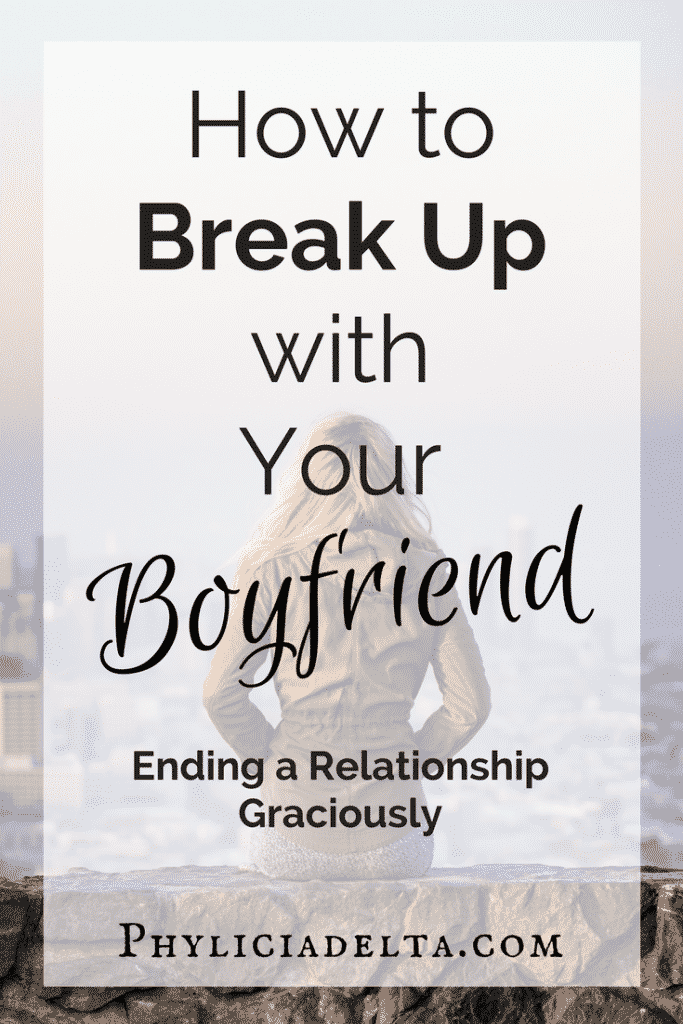 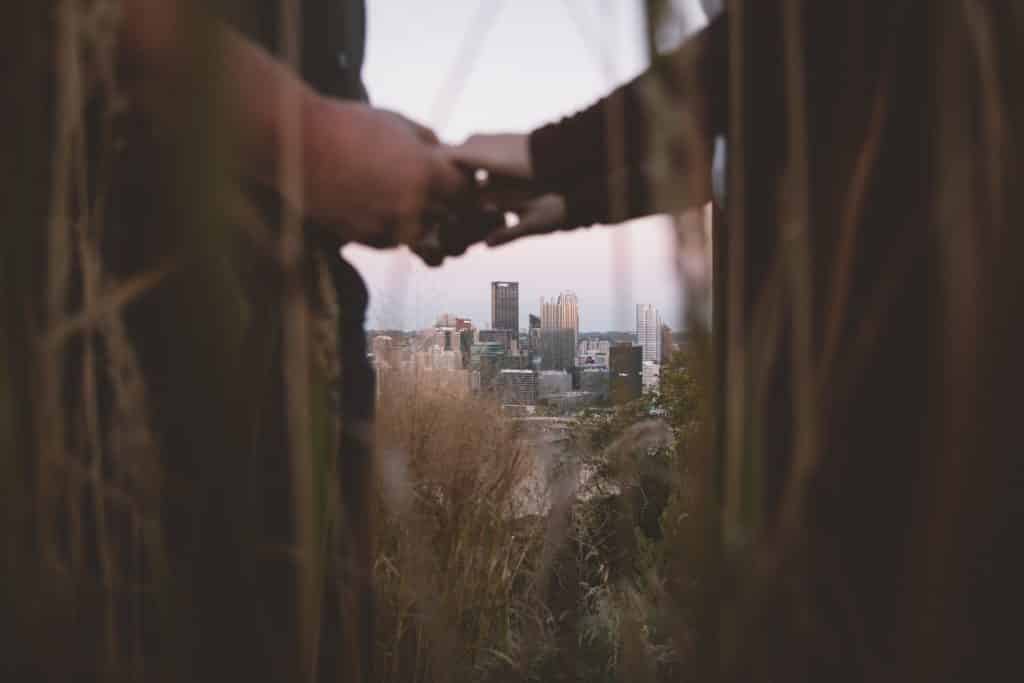 In my early relationships, I was very good at jumping in quickly only to realize – too late – I wanted out. I was the royal break-up queen, and to some of the guys I dated, I was a royal jerk. I didn’t know how to end a relationship gracefully, a fact usually rooted in the reality that I’d pursued the relationship too soon in the first place.

But break ups, as painful as they can be, are not our enemy. In fact, break ups can strengthen us for future relationships, teaching us crucial things about our natures as women and what we need to be seeking in a mate. No one said you would marry the first person you date. While some people do – and good for them! – not everyone has this destiny, and if you lived a holy life in that relationship, a break up does not “tarnish” you for the future. And if you did sin in the relationship – especially physically – there is redemption for the repentant.

I don’t believe any relationship is a failure. While it pains my heart to think that I hurt some young men in my dating days, I believe that both I and them have come out of those relationships with greater wisdom and character. All of them are now happily married, as am I. And because at least three of those relationships were built on physical standards that protected my purity, I have no regrets outside of the emotional pain I may have caused. God used those relationships to teach me about myself and what I needed in a future mate.

But when it came to actually making “the break”, I had no clue what to do. I was often plagued by guilt, shame, and a nagging sense of being the “bad guy” for months, even when I knew I had made the right decision. Sometimes I tried to patch things up, only to be crushed when they didn’t want to talk to me (for obvious reasons… hindsight being 20/20). Just as in relationships with other friends, family, and coworkers, there really is a best way to conclude a dating relationship. Let’s start by talking about what NOT to do:

How Not to Break Up

If you’ve been following this series, you may have noted that the guys I interviewed in the “What Godly Men Look For in Women They Date” post were adamant on one point: be honest. Nothing irritates them more than a girl telling them she wants out “to get to know God better”. Shouldn’t that have been happening all along? Even if you feel God is calling you to end a relationship, something was happening in that relationship to lead you to such a conclusion. Maybe he wasn’t interested in spiritual things. Maybe he was inattentive. Maybe you didn’t share values. Whatever the real reason you feel God is leading you to break up, be honest! You owe it to him.

It’s a lot easier to be vague in an effort to protect the guy from being “hurt”. Fact is, break ups do hurt! Being vague only increases the frustration as the guy tries to figure out what he did wrong. In a sense, telling someone exactly why you are breaking up with him does him a favor: it gives him something to think about for future relationships. He will be hurt. His pride will be wounded. But if you are going to break up, break up honestly.

2. Beat around the bush for days… weeks… or months.

I was an expert at this. As I agonized over “making the break”, I dragged out my decision for weeks at a time. I’m not good at hiding what is on my mind, so those weeks were spent being asked “what was wrong”, saying “nothing” when in fact there was a very big “something” wrong the entire time.

Once again: be honest. Once you have prayed about the issue and know what you need to do, simply tell him the truth. Do it quickly. Write a letter if you have to, but deliver it in person out of respect (unless the person is abusive or otherwise dangerous, in which case get help, protection and counseling as needed). It’s like ripping off a Band-Aid. Extending the pain will not change the end result.

In our heads, we think staying “friends” after a break up is the nice thing to do. It shows openness and sincerity. But if there is one thing I learned the hard way, trying to be “friends” with the guy you broke up with is just another way of extending his pain. Believe it or not, they often continue to hold out hope that the “friendship” will give way once again to a relationship. When they realize you never intended to date them again, the second break-up is often worse than the first.

Both guys and girls need space after a break up. Don’t text or call to check up on them. Don’t Facebook message them at midnight in a moment of regret. Though Jesus wasn’t talking about dating when he said it, his words: “…He who puts his hand to the plow and looks back is not fit for the kingdom of heaven” (Luke 9:62) illustrates a good point in this context. Once you’ve made up your mind to do something, don’t go back and un-do it. If you feel called to end a relationship, let the “no be no” and walk away completely.

Both parties in a break up leave with some hurts – even the one who does the breaking up. It is tempting to run to the nearest listening ear: an old guy friend, someone who knows your situation, someone who cares. Be aware that you are emotionally vulnerable and choose your confidants wisely. I honestly recommend finding a girlfriend to confide in during this time, or an older mentor (female or a married couple) to help you during this time.

My last relationship before Mr. M (my husband) did such a number on my heart I decided to take three months “off” from dating. I knew Josh during those months. I found it very tempting to rehash my prior relationship with his ever-listening ear, but he stopped me. “This isn’t healthy,” he told me. “Once you’ve closed a book, Phy, you’ve also got to stop reading the back cover. Put it behind you.” The space he gave me to recover helped us enter into a healthier relationship when we finally did end up dating.

5. Let one man’s flaws cast doubt on God’s goodness for your future.

If you broke up with a loser, it can be tempting to think that’s the best you can get. But it’s not. Your God is bigger than your last boyfriend, and He can redeem every foolish choice that is submitted to His wisdom.

As discussed in the post “Dear Girl, A Good Man Will Still Want You“, when we repent and come back to the Lord He does not use our past as the measure for our future. Just because one man failed you, or the relationship crumbled beneath you, is not an indicator of your future. Learn from this time. Trust the Lord. And lean into HIS love for you in the absence of human companionship.

What if HE Breaks Up With ME?

This is all fine and good if you’re the one doing the breaking up. But what if he breaks up with you? Getting the raw end of the deal often leaves us with a lot of insecurity and pain. It can make us question our value, our beauty, and even our personality. How do you deal with a break up when you’re on the other side of leaving? While many of the above principles still apply (texting your ex at midnight, rebounding, etc.) below are some principles that get to the root of break-up brokenheartedness:
1. Remember that your value is not based on one man’s opinions or actions.

The enemy loves to use human relationships to make us doubt the value God has placed on us. We tend to unconsciously shift our wounds from people onto God’s shoulders, as if He is the one who rejected us. Don’t believe those lies! Your value is not based on whether or not a specific guy loved you. Yes, it’s a blow. Yes, it hurts. I’m not pretending it won’t (I’ve know how it feels). But if man is the measure of your value, you’re going to spend the rest of your life trying to measure up to whatever standard your current boyfriend has for you.

Living in your God-designed value allows you to truly be yourself no matter who comes into your life and who goes out of it. And no matter what people do to you, you can rest in the fact that God is your justifier and your defense.

2. Recognize that this pain is deep, but God’s love goes deeper.

Trying to “stuff away” the pain you feel will only cause it to resurface in a different form: bitterness, anger, negativity. Allow yourself to feel the pain and recognize it for what it is. But in recognizing the pain, let it drive you to the Healer. God is an expert in dealing with rejected, broken women. Throughout the gospels we see Jesus working with women whose lives were in shambles, whose health was falling apart, and whose relationship history was nothing of which to be proud. Those stories are the ones we remember because they are stories of God’s glory over sin, shame, and pain. His love goes deeper than your deepest wound.

3. Recall God’s faithfulness to you in the past and trust He will be faithful for your future.

One of the reasons I keep a prayer journal is to record prayer requests, but another is to write down God’s answers. That way I can go back and see how He was faithful. I am sure at some point or another I thought my past relationships were “it”. Looking back on the pain and confusion of those break ups, I can see how faithful God was. He was faithful to use those situations and bring me to where I am today: married to a wonderful, loving, hard working man and expecting his little baby in six weeks. Along the way I finished my college degree, paid off all our student loans, got my dream job and traveled around the nation. If I had stayed in any of those previous relationships, many of those things would have never happened.

God HAS been faithful to you in the past, if only to provide food, shelter, a family, a car, and a job for you over the years. Many times we look at our lives in terms of what we don’t have and forget how much God really is providing. He is faithful. He will continue to be faithful. He can’t NOT be faithful! So trust His love, lean into His healing, and let Him redeem this situation into something beautiful.