Stretch Marks Are the New Black 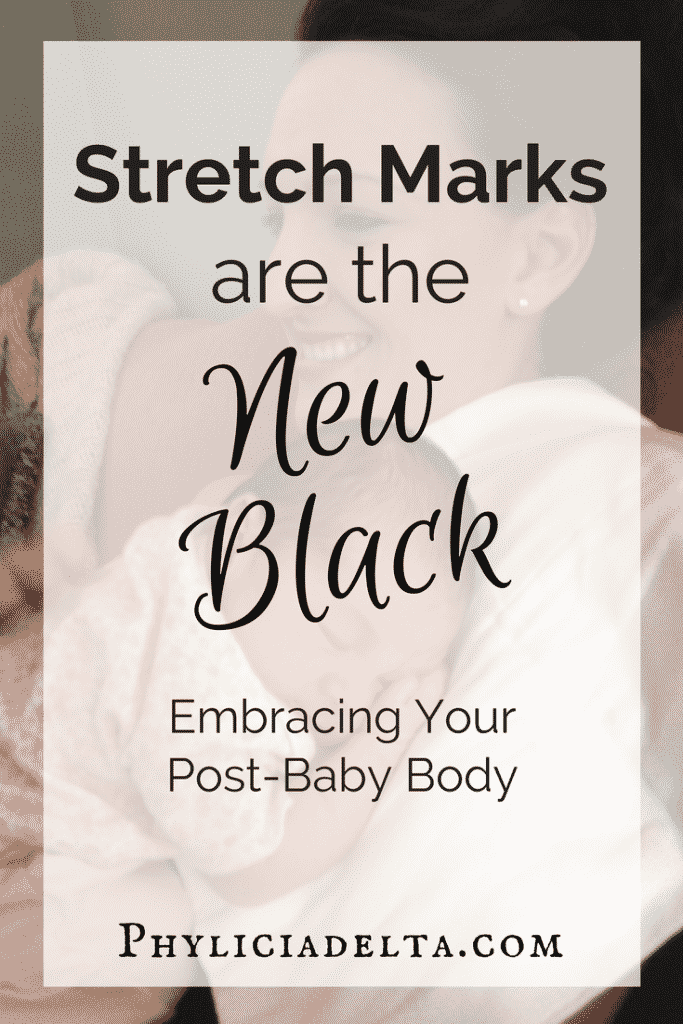 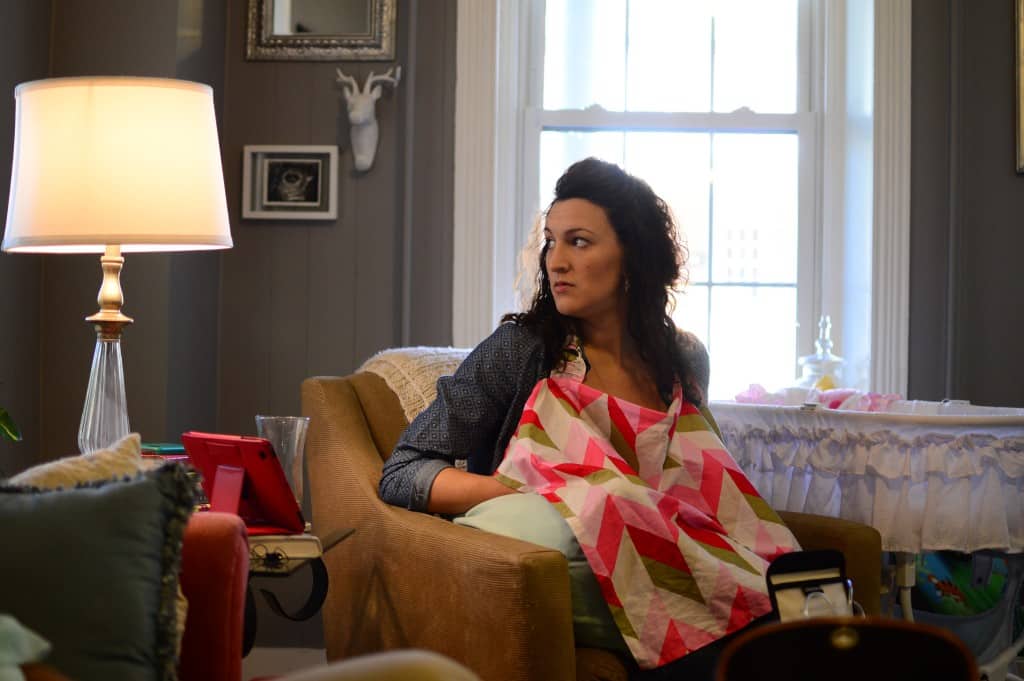 There was a time, not so long ago, I had to decide which of ten different blazers I would wear for the day. I had concerns like, “Which of these complements my brown stilettos?” and “Will this matching suit set make me look too much like a lawyer?” But these days getting dressed is much simpler. I only put on three things: a bra that doesn’t smell like milk, enough clothes to prevent the mailman from calling the police, and lipstick bright enough to qualify me for the red light district.

No longer wearing blazers and stilettos, I am still strategic when it came to my outfits. After one particularly vomit-prone day where I changed shirts three times, I developed a new strategy of baby-proofing my clothes. Since spit up comes in varying shades of white (from ‘creamy winter white’ to ‘curdled milk’ to ‘why do you even bother to feed me’) I started exclusively wearing white shirts. They disguised the spit up like a charm, and I could wear them 2-3 times longer – at least until I started to smell like the dumpster side of a creamery.

If Adeline wasn’t soaking her clothes on one end she was exploding out the other. I soon realized that pretty dresses should be reserved for occasions no more than two hours in length. I’d also made the mistake of only acquiring one cover for the changing table pad. There was a particular week where Addie managed to produce a fountain of urine between the moment her diaper came off and the new one went on. I washed the cover twice a day until I got quick enough with the second diaper, and I soon became the fastest diaper-changer east of the Mississippi (Wild Bill Hickock had nothing on me).

My attempts to look nice for an oblivious audience of one – a three week old baby – served more as a distraction from the reality of what was under my clothes. You see, I’d done all the creams and lotions and oils. I had buttered myself into biscuitdom. And despite the fact I didn’t even start showing until five months pregnant and lost the baby weight rather quickly, the ninth month came and with it came the stretch marks.

I remember the first day I saw them. I was getting dressed in front of my vanity and happened to glance in the mirror.

“What’s here?” He wandered in the bedroom, where I was awkwardly trying to see under my nine-month-pregnant belly.

“Stretch marks! I thought I staved them off! I thought I would make it! But LOOK – ” I pointed at the offending stripes. “I look like a TIGER attacked me!”

“It’s not that bad, babe,” He said reassuringly. “You still look great for this late in pregnancy!”

I was not reassured. “You’re just being nice. You’re just a nice husband.”

“This is horrible. I thought I could at least make it through one kid without them. Now I’ve got like, four kids’ worth in one fell swoop.”

“Look on the bright side! You got all four kids done at once!” Realizing that statement was less than comforting, he changed tacks. “Every mark you have, you earned by bearing our baby. And I think it’s beautiful.” He kissed me. “I’m heading out for work.”

He left, and I scowled in the mirror. Stupid butters.

Now, post-baby, I could be re-named Scar. Between my tiger-striped stomach, hives-pocked arms and legs and the cold sore I developed, there were smallpox victims who had fared better. Every morning as I got dressed I pinched and poked and pulled, wondering if they’d fade, or if it mattered, or if I should even care. Am I wrong to care? Is it selfish? Am I vain? It’s not like I was looking for the approval of others or that I was afraid to be seen on a beach – I’d given up my bikini a long time ago in a decision that had not once filled me with regret. My husband repeatedly testified that he thought I was beautiful, marks and all. This was something inner.

They were fleeting thoughts: running through my mind as I got dressed, quickly forgotten throughout the day. But the next morning they’d be there again. I had this hesitancy to accept my body in its new state, as if acceptance would somehow end in apathy, and apathy would lead me to neglect my body completely – a neglect that would inevitably lead to looking like Jabba the Hutt for the foreseeable future. It seemed far more practical, albeit miserable, to critique my new body every time I saw it in the mirror.

The 1 AM feeding is when it dawned on me. Adeline had fallen asleep, laying in a milk stupor with her eyelids fluttering and a smile flickering on her face. People told us she was a pretty baby. “Thanks,” I’d jokingly reply, “We tried.” Of course, as her mother, I thought she was the prettiest thing in the world. As I looked at her in the dark, I hoped she’d never leverage her beauty – but that she’d never doubt it, either. And that’s when I realized – I’m the one teaching her that balance.

I refused to accept my body out of fear I’d stray into apathy, but that message doesn’t translate to innocent eyes and ears. The message my girl would inevitably hear would be one of never good enough: the same message Cosmo trumpets from the grocery aisle with touched-up pictures and half-naked models. My acceptance would prove that beauty cannot be defined by one standard, but that it changes with time and season; that it flourishes through life’s change and experience and is best appreciated by those who’ve experienced those changes with you – even the changes that scar.

I was reminded of an article I had written months before, a post I’d hoped would reach young women with that same message of acceptance I was struggling to reconcile:

“You are Woman: the final touch, the crowning glory, the magnum opus of Creation.

“Glory” is another word for “beauty” in the Greek. Your beauty, dear girl, and mine – it’s a small mirror of the glory of an Almighty God. God covered that glory in the garden to preserve its magnitude; to shield its power… [the world will say that you] lack self-confidence if you cover up your cleavage or your midriff or your thighs. It will speak to the nagging part of you. It will tempt you to disbelieve your value as an image-bearer of God.

But the covering is our grace and our glory.  It is not our shame. It is evidence of confidence: a confidence so strong, so inner, so grounded in something outside itself it transcends anything the culture can offer.”

The next morning I looked in the mirror and I smiled. Yes, it looked like Shere Khan had taken a swipe at my lower abs. Yes, I had spots on my legs that rivaled all 101 Dalmatians. And though I’d lost all my baby weight it had left me looking a bit like deflated balloon. This body was, and is, new to me, but it’s a new kind of beauty. It’s the same me – my same classic self that wears red lipstick and still favors a nice blazer and heels – but it’s been refined by change and experience; the greatest experience of my life. My body gave life to another body, and I want that little girl I to whom I gave birth to know she’s not just skin to be preserved at all costs, like some kind of taxidermied animal – she’s an image-bearer of God.

So in white t-shirts and workout clothes and red lipstick I have a redefined beauty that fits the stage of life I’ve entered in. Someday she’ll watch me and learn that the mirror is not a measure of a woman’s value because our value is pre-determined, and life only cements that value deep in our souls as we accept the changes and let the scars act as testimony to the experiences we’ve had. Our bodies are marked as our souls are stretched, expanded to love in ways we never knew we were capable of loving.

So I’ve got stretch marks, body and soul.  But haven’t you heard? Stretch marks are the new black.