Dear Husband, I Don’t Know You Yet 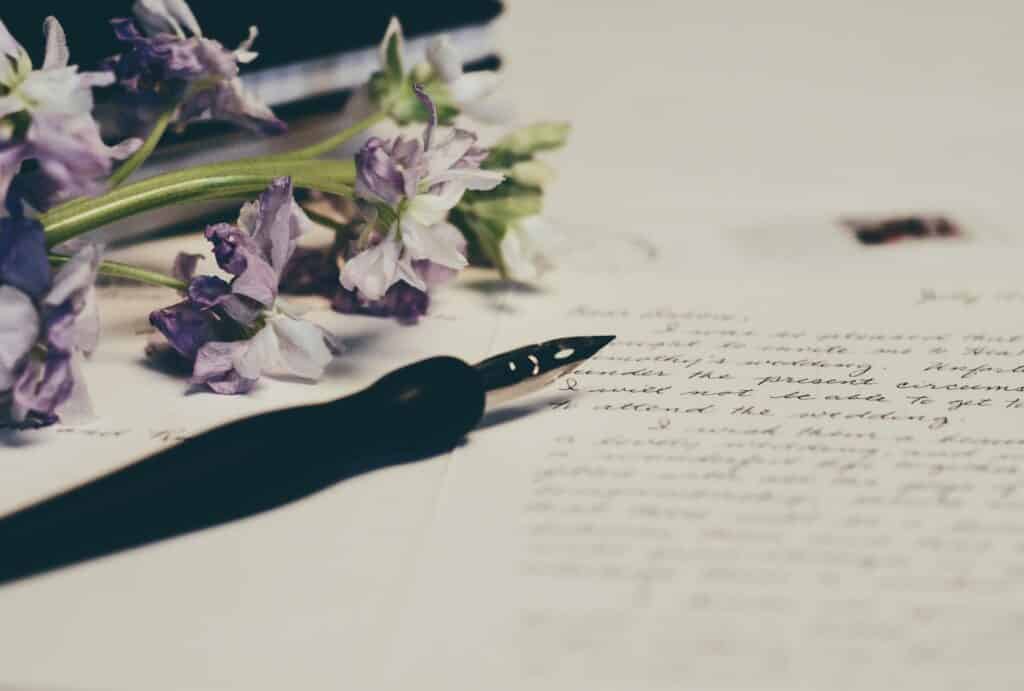 A lilac bush scraped the glass every time the wind danced through its branches, and with each scrape I paused over the list before me. I was leaned against my hope chest in the sunlight, my bible at my elbow, chewing on the end of my pen as I thought carefully over each bullet point. I tried to keep my cursive even so it looked pretty. After all, I planned to have this list a long time: I was only sixteen.

Eight years later I found the List. It was folded neatly in the back of my high school bible. It had been added to and scribbled on a little, but the title still read: My Husband’s Character. It was my wish-list of qualifications for the man I would marry. My eyes scanned the page and I smiled the retrospective smile of a married woman looking back on a young, unmarried self.

A man who dresses and acts maturely.

A man who is clean and handsome.

A man who can at least tolerate country music.

I remember how I labored over that list. In my head, I pictured what this man would be like: the one I would one day spend the rest of my life with! I found it necessary to write out all my preferences, just to remind God in case he forgot I wanted a man who ‘can ski or snowboard and horseback ride’ (only one of which Josh and I have actually done together). Apparently ‘clean’ and ‘mature’ men were a rarity in those days??

There are some who would say making a ‘list’ of qualities you want in a mate is a silly idea, and to a degree, it was – especially at sixteen years old. But if I had it over again, I would still write the List.  The List was the standard I used to measure the men who pursued me – but it was also the standard I used for myself. I didn’t know when or how or IF God intended to bring love into my life; I didn’t know my husband yet. But I was determined to love him as best I could from afar.

I first learned this concept from Leslie Ludy in her book, When Dreams Come True, co-written with her husband Eric Ludy. Leslie explained that she took Proverbs 31:12 literally when it said:

“She does her husband good, not harm, all the days of her life.”

All the days of her life include the days before she meets him!

But those days can be long and arduous, and I encountered times where I made an idol out of marriage and relationships, becoming discontent with the lot God had given me. I wondered if I should hope for marriage at all – if it was wrong for me to have these desires when they so easily became an idol in my life. But as I prayed over the List I had peace that the desire itself was not the problem. As long as God was king of the List, not the List (and its corresponding hopes) king over me, my dreams could still lay sleeping until God chose to awake them.

So I began to write letters. Year after year I wrote letters to my future husband in a little paper booklet. The first one was written in September of 2009, when I was 19 years old:

“I used to think it was silly to write letters to you because you aren’t in my life yet, and also, my focus has been skewed in the past, so it wasn’t best for me to write you. But now I think I can, because it will help me to remember to honor you day to day. I got this idea from reading Proverbs 31. It says, “she brings him (you!) good ALL the days of her life.” That means before I meet you! So to keep a good perspective, I’m writing you this little journal up until I meet you… which could be a long while yet.”

It was a long while: four years. I wrote that letter in my college dorm room. I would leave college, and the semester after my departure Josh would arrive. We would not know the other existed for another two years, and even then we wouldn’t be interested in one another. But I kept writing.

I wrote through tears. I wrote in happiness. I wrote in times of hope and sadness and frustration. I wrote when I didn’t think he even existed. But writing the letters brought me to my knees before God as I surrendered my singleness to Him in each heartfelt note to the husband I did not yet know.

The List was originally meant to help me keep my standards for relationships. Instead, the List brought me before God where I learned (and am STILL learning!) to be His kind of woman. With each letter I wrote I realized how much growth and grace was needed for me to be – not just a wife – but a woman after God’s heart. And now, as I look back through the pages trapped in time, I see a story of growing faith and a changing heart.

God was not so concerned with the intent of my letters – marriage – as He was with the process it took to get me there. In the pages of the letters and in the qualities on the List I see not my hopes but God’s intentions. With each, “Dear Husband…” my hopes were brought to the surface and set at the foot of God’s throne for Him to do with as He would. I didn’t know where this man was; but I believed he existed, and I brought him before God until I knew him in reality.

“I really just would like to hide from it all, and I wonder where you are sometimes, hoping I will finally meet you. But these trials produce perseverance… and perseverance, faith.”

I had already met Josh but I had no idea he was the man God had for me! There, in the midst of trial and pain and confusion, God called me to perseverance without any “reward” in sight. Now as I look through the letters I see where He was moving when I wasn’t even looking.

There will be articles that will pop up saying we need to ‘not care’ that we’re single. There will be blog posts that say we should stop pursuing marriage and just seek God. It is very true that we must come to a point where we are content in the place God has us – single or married. We must also be careful never to idolize relationships and place them on a pedestal above our God.

But we must also be honest with our hearts before the Lord. There is nothing beneficial or commendable in denying the existence of your heart’s deepest desires (Psalm 37:4-5). Bring them to the throne of grace (1 Pet. 5:7). Ask God for an answer (Phil. 4:6). Dare to hope and dream and anticipate a beautiful future with a wonderful man, and pray over it daily (Prov. 12:4)! If God does not have this in mind for you, He will make that clear – just as He will make it clear if he does have marriage in mind for you.

Marriage is not the end-all: the gospel is. But as women, we desire to be desired. We want to be wanted. We long to be loved. These are beautiful things. Do not cease to hope: guard against apathy! Pray for your husband. Hope for him. Bring him to your God, and you will be surprised with how close to God you become.

I look at the List now and tears fill my eyes as I see how God has fulfilled it through Josh:

A man who truly reveres God.

A man who will pray and read with me.

He may not love country music or snowboard or horseback ride, but he is all the things that really matter.

The last letter in my little book was written on February 1st, 2014:

“When I started these letters, I could have never planned how our story would be written. But God has written a better story than I would have imagined. His hand of grace is seen on every page. His patient love has changed and molded me. His kindness has led me to repentance when I’ve been wrong. Through all these years he alone was the consistent factor in our story – because he wrote it.”

He did. He wrote the story. And He’s writing yours.

← How Does a Busy Couple Make Time For God? Why I Didn't Marry My "Type" →
0
0
Your Cart
Your cart is emptyReturn to Shop
Continue Shopping