Why I Didn’t Marry My “Type” 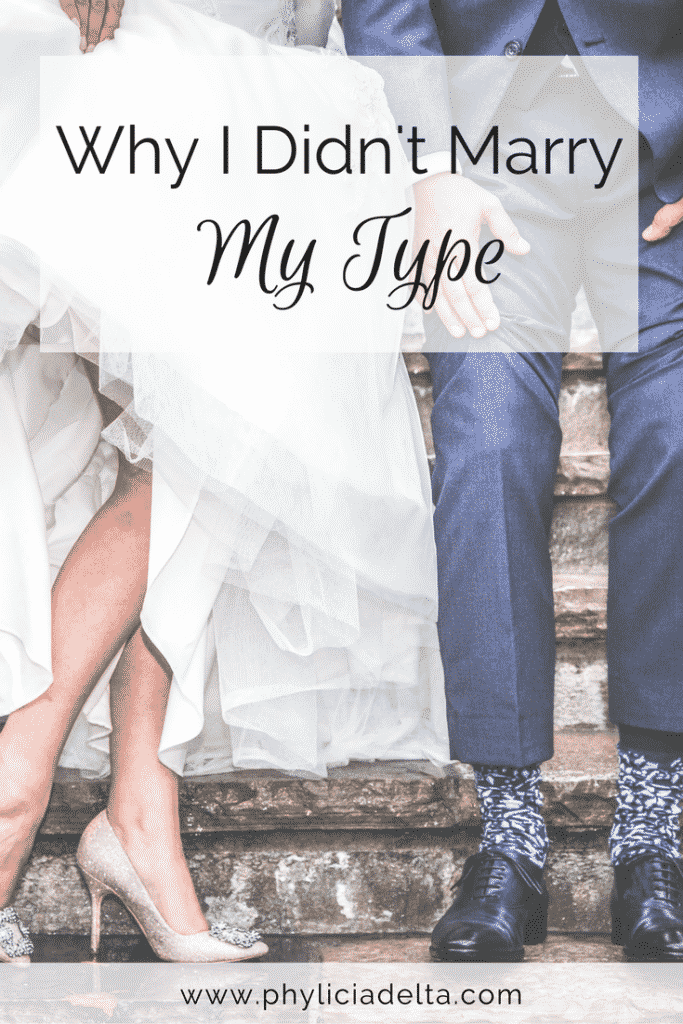 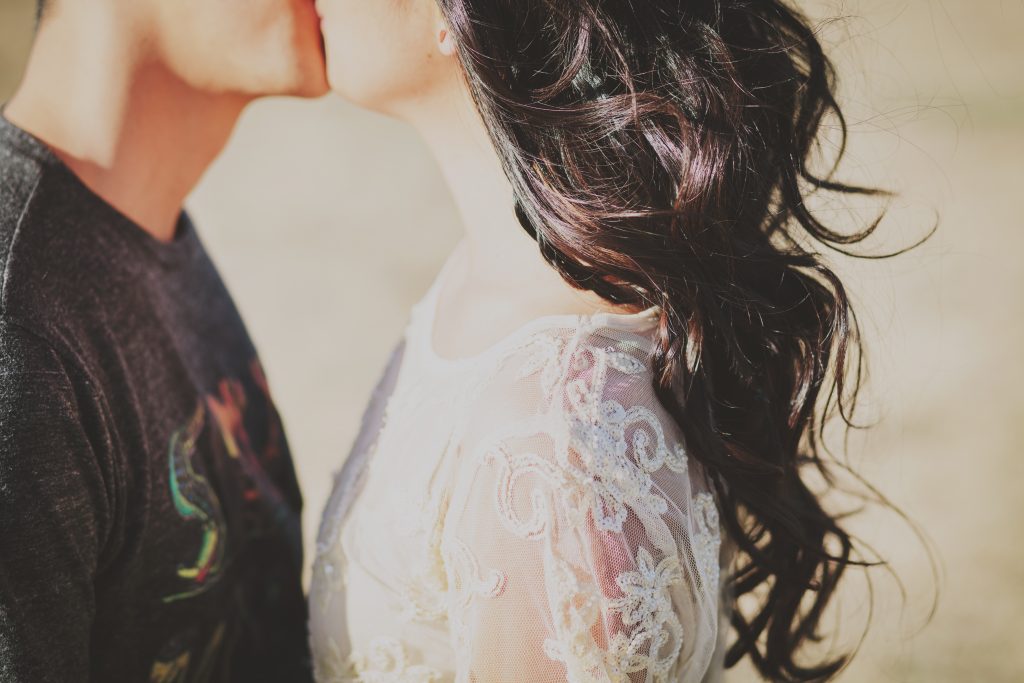 “I know why you dress the way you do.”

He couldn’t see me roll my eyes in the dark theater. “Oh really, you just know who I am after meeting me last week?”

Who does this punk think he is? I fumbled in my purse and looked at the girl to my right, thinking she might make some conversation. I had just moved to Virginia and was watching Sherlock Holmes with a group of friends. Somehow this guy ended up next to me.

“Well, smarty pants, why do I dress the way I do?” I turned to face him, arms crossed. I was wearing dark bootcut jeans, a nice blouse and heels. My curly hair (short at the time) was rarely straightened, partially due to the labor and partially because I considered it my ‘defining factor’ in a world of straight-haired girls.

“Well let’s see,” he whispered as the movie began. “Your heels have a pointed toe, because you don’t like round toes which make you look young. You probably don’t wear flats because you like how your legs look in heels. You like to look sophisticated. Am I right?”

I stared at him in disbelief. “I – um… well….” He smiled winningly and I saw how long his eyelashes were silhouetted against the big screen.

Well, he might be right, but he’s wearing green plaid shorts. I crossed my arms and watched the movie. He’s funny, and maybe a little creepy, and definitely not my type.

Two years later, almost to the day, I married him.

Josh and I look back and laugh on that first conversation. He was flirtatious, and I was idealistic. Neither of us found the other exceedingly attractive (read more in Why Attraction Isn’t Necessary), but we did find each other intriguing. I was confident, sassy, and convinced of my values; he was unintimidated, intelligent, and discerning. We quickly became friends, but only to “help each other out” in our separate relationship endeavors.

Funny how that goes.

As I look back on the timeline of our friendship, our dating relationship, our engagement and now our marriage of over two years, I can see why the “type” I’d imagined for years would never have worked. The intensity of my personality and unbridled opinions could only be borne by a man who both shared my values and had the confidence to soften my approach.

So why did we end up with each other? Why didn’t our ‘types’ work out?

1. At times, we both added to and strayed from God’s type.

God’s ‘type’ of man or woman is very simple.

That’s the overarching description. We get a little more detail from Paul about godly men in Titus 1:7-9:

“For an overseer, as God’s steward, must be above reproach. He must not be arrogant or quick-tempered or a drunkard or violent or greedy for gain, but hospitable, a lover of good, self-controlled, upright, holy, and disciplined. He must hold firm to the trustworthy word as taught, so that he may be able to give instruction in sound doctrine and also to rebuke those who contradict it.”

He also talks about godly women, young and old, in his letter to Titus in 2:3-5:

“Older women likewise are to be reverent in behavior, not slanderers or slaves to much wine. They are to teach what is good,  and so train the young women to love their husbands and children,  to be self-controlled, pure, working at home, kind, and submissive to their own husbands, that the word of God may not be reviled.”

That’s really the sum of things on God’s end. You could add in the Psalm 12 man, the Proverbs 31 woman, and a few other passages for additional guidelines; but there is one theme throughout God’s word. He’s concerned with the spirit, not the superficial.

When Josh and I both created our ‘types’ prior to meeting each other, they were primarily based on superficial interests like appearance, hobbies, likes and dislikes. But when I learned to love Josh, it wasn’t because I liked his ‘look’ or because we had a lot of common hobbies. We had common values, and I could tell he wanted the same God-priorities that I did. Our previous ‘types’ added the unnecessary to those priorities, and sometimes strayed from God’s values completely.

God taught us through our relationship that His values were all we needed for a lasting love, and that is what we’ve found.

2. Before, we looked for a relationship instead of a friendship.

We both dated a few people before we met each other, but neither of us had ever dated a friend. Maybe we both tried to play it safe, afraid of what might happen; I know on my end I was afraid of that kind of emotional intimacy. I didn’t want to let anyone close enough to see me for me. I was convinced if any man got to know me that well, he’d see my selfishness and leave.

Josh was the anomaly. That day in the movie theater he looked into my heart and knew my motives (not all of which were positive), something I had never experienced.

Our friendship was a mutual understanding. I appreciated his gestures of kindness, and even reciprocated them. Somehow he had a way of seeing my soul: the desires, the hopes, the goals and dreams, and swooping in to make those dreams a reality.

When we tried to build relationships out of thin air, founded on hobbies, interests, and superficial attraction, those relationships stumbled along shakily and eventually collapsed. They were weak. There was no backbone of friendship to sustain them.  But out of our friendship developed a deeper relationship, and that relationship grew to love. His love was willing to see my selfishness for what it was and then see past it to my potential.

3. In the past, our own expectations were our measure for a mate.

In relationships, I had a few nonnegotiables. I created my “type” on top of these basic qualifications. I really prayed over those nonnegotiables and stood by them through my relationship with Josh, who met all three: love God, work hard, be teachable. It was the expectations I created in my mind – the ruffles and frills, so to speak – that had to go. Things like appearance, dress, looks, and hair color, hobbies, and different taste in music are all superficial. My expectations were developed over time as I imagined my future husband: What he would do, say, look like, and enjoy. How surprised I was to discover that real men don’t act like imaginations!

Over time I met very handsome, very rude men. I met men who shared my hobbies but didn’t have any faith to speak of. Somehow, my expectation of a man who liked ALL the same things I did and never disagreed with me was hard to find! I quickly learned husbands can’t be bought in boxes.

And that’s good, because God doesn’t want his men confined. He wants them strong, free, and bold, ready to stand up for Him and lead their families in their faith and freedom. So that’s what he gave me: An un-boxed man. An unexpected friend. God took apart my type and redefined it in the character of Josh. He loves God. He works hard. He loves me.

Life with him is banana pancakes, early gym workouts, and a secret stash of once-in-a-while cigars in his desk drawer. It’s the cross on his shoulder and ‘I love you, darling’ at night and his voice reading the Bible while I put on my makeup.

He’s out of the box, but he’s God’s type. And that’s perfect for me.

Since the writing of this post Josh and I have been married six years, had three children, and worked through some very difficult seasons in our marriage. We are very different indeed! But we can attest that ultimately, what unifies a couple and makes a great marriage is the heart to love the Lord above all else. This has kept us center when everything else failed.

← Dear Husband, I Don't Know You Yet You Are as Safe From Sin as You Are Close to Christ →
0
0
Your Cart
Your cart is emptyReturn to Shop
Continue Shopping