Delighting in the Trinity [Book Review] 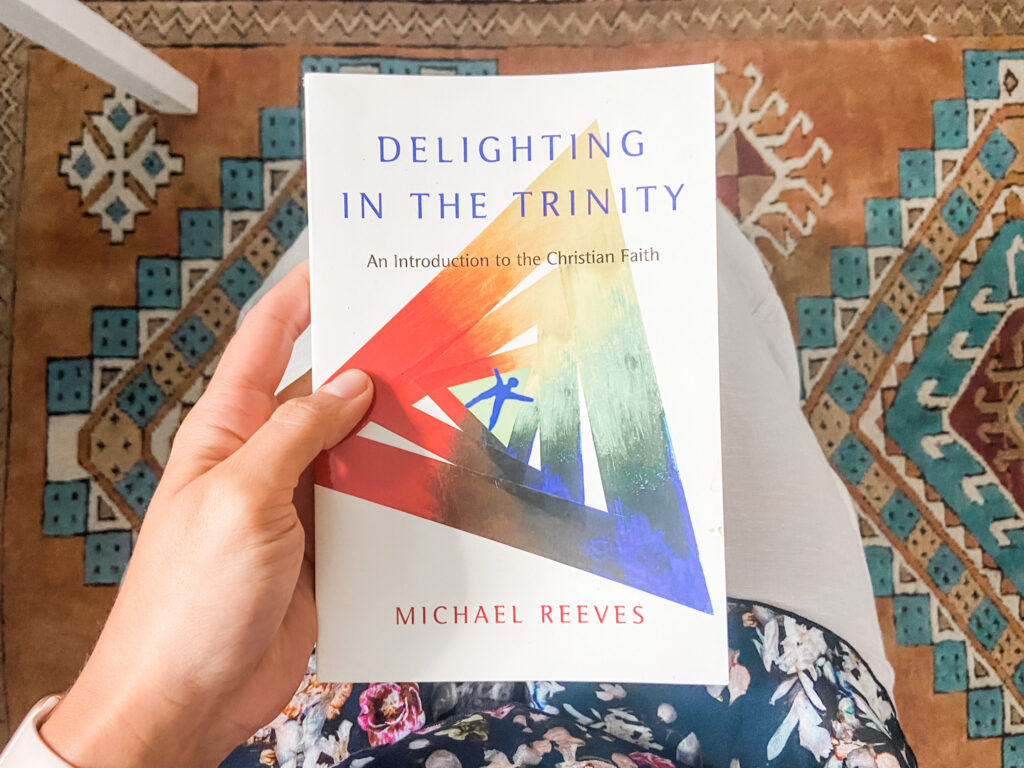 The very first book I assigned as part of the Every Woman a Theologian 2021 book club was this one. That probably gives away my review, but so be it: this is one of my favorite theological books of all time. Perhaps because I didn’t realize I needed it when I first read it, Michael Reeves’ words struck a chord in my heart and faith. It’s no my go-to resource for Christians with any question about the character of God.

I’ve substantially revealed my bias already, but I’ll plow ahead with this review – because the more who know about the book, the merrier!

Delighting in the Trinity is technically part of a series. Reeves has also written books on the nature of Christ and the Holy Spirit, specifically, though he addresses both Persons in this book as well. DITT, though, specifically addresses the historical, philosophical, and personal implications of a triune God – a doctrine we often take for granted without fully grasping just how unique it is.

The book is only six chapters – quite manageable for the average short-attention-spanned American. Reeves covers:

There are many doctrinal points discussed in this book, though indirectly as opposed to systematically. This actually makes the book much more accessible and interesting to a lay reader. With his characteristic humor and gentleness, Michael Reeves walks even the most hesitant reader of theology through major doctrinal truths without overwhelming them with too heavy a hand. (The book also contains illustrations and short cameos of Christians through history, a pleasant surprise for the Gastons among us).

Though the book is really a short treatise on theology, Christology, pneumatology, and soteriology, you’d never know it (in the best of ways). That’s why I recommend it so often. It’s like an introduction to essential theological truths without all the technicality.

Reeves is Reformed, which comes through in this book, but not enough to create disagreement with Arminian readers. The focus is on the character and person of God, the essential-ness of the Trinity, the historical basis for its acceptance, the biblical proofs to back it up, and – most helpful – why the Trinity matters for daily life in faith. On that note, I love this quote from page 47:

“The tragedy is that so many think that the living God is the devilish one here, as if he created us simply to get, to demand, to take from us. But the contrast between the devil and the triune God could hardly be starker: the first is empty, hungry, grasping, envious; the second is superabundant, generous, radiant, and self-giving. And thus the triune God can and does create. Grace, then, is not merely his kindness to those who have sinned; the very creation is a work of grace, glowing from God’s love. Love is not a mere reaction with this God. In fact, it is not a reaction at all. God’s love is creative. Love comes first.”

In framing who God is and why He created, Reeves also touches on the problem of evil, such as here on page 58:

And in discussing the nature of evil, we naturally turn to soteriology:

“Now if God were not triune, if there was no Son, no lamb of God to die in our place, then we would have to atone for our sin ourselves. We would have to provide, for God could not. But – hallelujah! – God has a Son, and in his infinite kindness he dies, paying the wages of sin, for us. It is because God is triune that the cross is such good news.” (pg. 73)

There is so much more in this rich book; so much to develop one’s theology and view of God, leading to a deeper love for Him and for those around us.

It’s rare I can fully recommend a book without some kind of addendum – perhaps due to the maturity of the reader, or simply because I must make room for differing views, or because (in the case of fiction) there was that scene on page 231 I wish I could unsee – but in this case, there is nothing for me to caution about (I always feel a bit silly saying this, reviewing the work of such great scholars as Reeves, but given that we are a critical thinking ministry I do what I must).

The Trinity is increasingly under fire from atheist perspectives and has even been a topic of debate in some denominations (such as Pentecostal Oneness), which means it behooves every Christian to understand the doctrine and its implications for Christian life. In other words: this is not an “optional” topic for us to ignore until we’re 65 and have the time. It’s a topic for which we need to make time in a post-Christian culture.

I think this book also acts as a refutation to the concept of Eternal Subordination of the Son (ESS) though Reeves certainly did not set out to refute that particular doctrine. If you’re not familiar, you can read more about it in Aimee Byrd’s series on the topic.

My recommendation with Delighting in the Trinity is this: Buy it. Own it. Lend it out after you read it. Re-read it every five years. It’s truly a transformative book with a message that is not all that new, but is all that rich and necessary. There is no better author to talk about it, either; Michael Reeves is a kind, wise, gentle scholar who can escort the most hesitant reader into a better grasp of Christian theology.

Worth your time and your dollars.