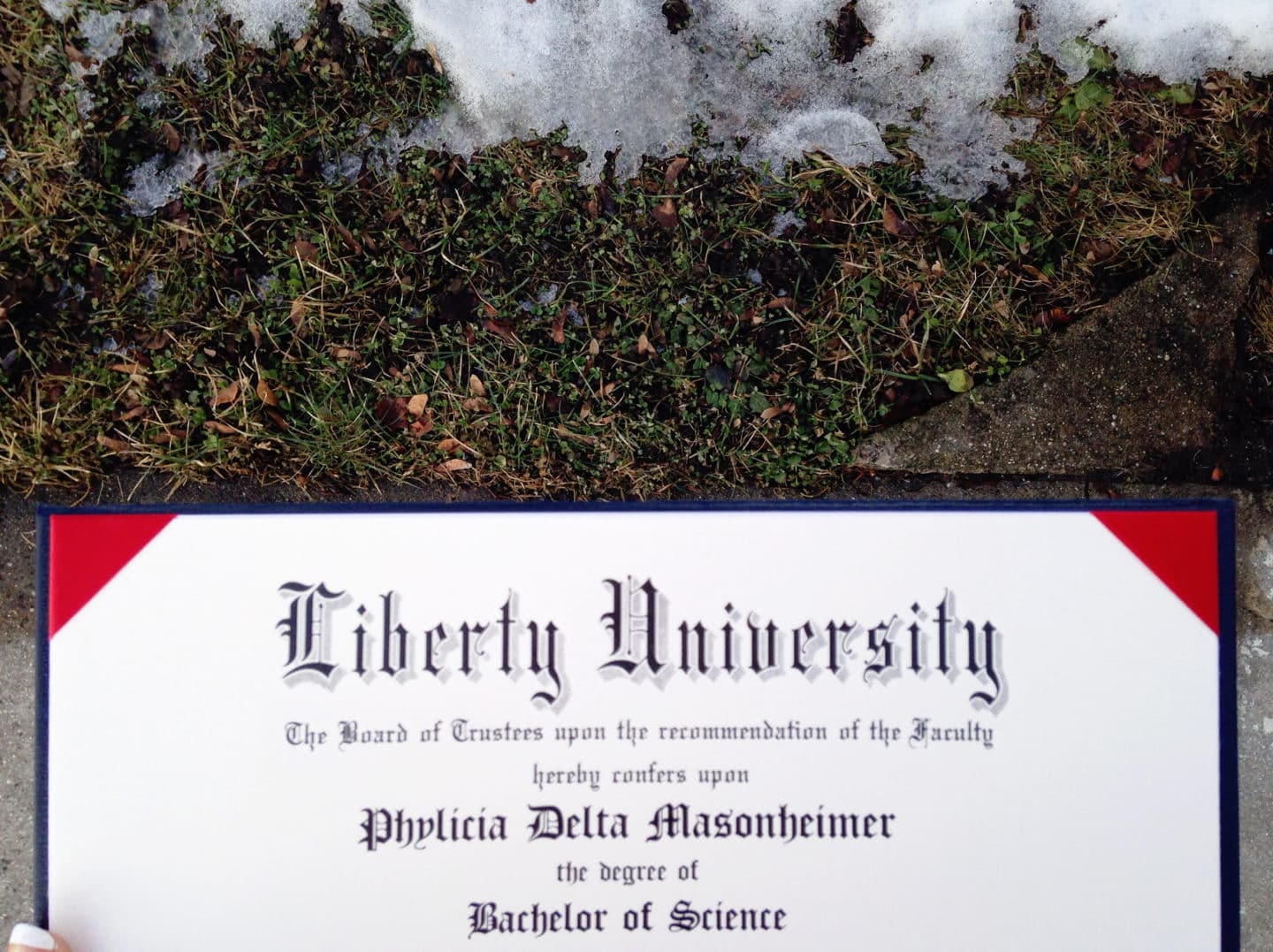 Liberty University has always been political.

I don’t usually get involved in these discussions of my alma mater, but given my voice in the evangelical blogosphere – and the number of my readers who are current and prospective students at Liberty University – I felt it necessary to add my say.

Most students who attend LU know what they’re getting when they sign up. Convocation has always featured political speakers, the Washington Semester is a coveted internship for government and similar majors, and LU cranks out hundreds of politically-minded students who go on to successful careers in their field (Penny Nance, Shannon Bream). But there are many MORE students who attend LU for its dedication to train “champions for Christ” or – as President Jerry Falwell Jr. said in one of my very own undergrad convocations – “vocational missionaries”. They attend to be equipped spiritually and educationally for their careers.

That’s exactly what Liberty does. Liberty’s professors and academics are unparalleled in many ways. The dedication of the academic staff to doctrinal consistency and high-quality education is what made me choose it in the first place. The fact that the school was often involved in politics was not a factor in my decision.

So the fact LU is in the news for politics neither surprises nor bothers me. What bothers me is that my alma mater’s president seems bent on furthering a political agenda at the cost of the university’s Christian witness. This is not an isolated issue, affecting only LU students and future enrollment; it represents a deep-seated hypocrisy among Christian leaders who attempt to defend political issues biblically – and end up compromising both religion and government.

I have two degrees from Liberty. I worked in their admissions and recruitment offices for five years, resigning in 2015. Liberty supplied me with a theological and educational foundation that I am grateful for every day. That’s why I am appalled and embarrassed by the actions of President Falwell, who has jumped through every hoop possible in defense of President Trump.

I don’t care that Jerry loves President Trump; the election is over. But that’s just it: The election is over. The President is President for another three years. What do we serve to gain, as Christian people, by defending an immoral man’s past actions? He isn’t the “pastor in chief”, after all. He’s not telling us how to live our lives (unless you were at the September 2012 convocation like me, in which he advised students to “get a pre-nup”). Why does his first line of defense consist of evangelical Christian leaders?

I think there’s an obvious answer. Jerry Jr. and leaders like him are more conservative than they are Christian.

When you are submerged in Christian culture, like Liberty cannot help but be, the lines between biblical and conservative quickly become blurred. To follow Jesus is to adhere to a particular political agenda: Social, fiscal, and otherwise. And while I firmly believe that our values should dictate our political views and actions, it’s far too easy to reverse priorities. Pretty soon your political views are dictating your values, and you’ve got to come up with biblical reasons to defend the choices you’ve made.

Judge Not Lest You Be Judged

That’s why Jerry, and by association, Liberty, is the laughingstock of secular media. Unbelievers aren’t stupid. They see right through hypocrisy. When the election was in full swing, Jerry sang Trump’s praises: “Donald Trump lives a life of loving and helping others as Jesus taught in the great commandment.” (source) Now we find out that Trump isn’t quite “loving” and “helpful” enough to stay faithful to his wife (not that anyone is surprised) and Jerry must defend his choice.

None of this is really about President Trump or his adultery; he’s an unbeliever acting like an unbeliever. I think what President Trump did was wrong, but I’m not surprised. Then again, I never set out to defend his morality, so I don’t have any skin in this game. Jerry does. But Jerry only has skin in the game because he made the choice to place political influence and popular approval (by the people whose approval he wanted) above his Christian faith.

Some might say I have no authority to make that judgment. You might quote to me – like Jerry did about Trump – the oft-used passage from Matthew 7:

Do not judge, or you too will be judged. For in the same way you judge others, you will be judged, and with the measure you use, it will be measured to you. (v. 1-2)

Thanks to my Liberty University degree in religion, I can tell you that this argument is invalid. The context of Matthew 7:1-2 is hypocritical judgment; condemning someone else for the very sin you’re committing. Secondly, in the second half of the “judgment” passage you’ll see we ARE called to judge sin in the lives of fellow believers, once we have reconciled ourselves to God:

We are CALLED as believers in Christ to hold fellow believers accountable (Gal. 6:1). We are also known by our actions (Prov. 20:11, 1 John 3:18, Jas. 3:13). If you need further proof, Jesus Himself said: “Do not judge by appearances, but judge with right judgment.”(John 7:24) Jerry’s actions over the past seven years (or more) have been increasingly evident of a political priority, which would be fine – if the biblical priority lined up. But it doesn’t. In his recent comments to CNN last week, Jerry said:

There are multiple theological errors I could point out in the list above, but that’s not the point here. The point is this: When your America is bigger than your God, you have to start stretching Scripture to keep her that way.

A Greater America is Not Our Call

To be free to bring faith into the political arena is a profound privilege that many Christians around the world will never experience. But at the same time, I’m not sure they – and the saints of ages past – would always say they are missing out. Because when church and state become so intertwined, what used to be “influence” can quickly merge into a quest for power. Contrary to what Jerry thinks (as quoted in this article), the Protestant Reformation did not occur because Reformers were “anti-establishment”; it happened because the Catholic Church of the day was morally corrupt and theologically compromised. That’s what happens when you use biblical truth to further a political agenda. Somewhere along the way, “truth” becomes whatever is needed to push the agenda through.

Conservative American Christians must be careful to check where their trust lies. Is it in changed legislation? Is it in a better, greater nation? Or is it in the God who raises and lowers leaders, who created the world on which these nations have risen?

The idea that infusing morality into government is entirely up to us is 1) not a biblical mandate and 2) evidence of a Westernized, individualistic mentality that flies in the face of Christianity’s core values. Morality was never up to us, and it never will be. All goodness is accomplished through Christ. Moral corruption and theological compromise happen when we try to play God in places God never wanted us.

We do need Christians in government, and we need voices of truth in legislation, but at the end of the day, that’s not where our hope lies. Our mission as believers is not to set up a Christian kingdom on earth, and America is not “God’s nation”. We have one call: To GO and MAKE disciples. If America becomes great while we do that – so be it. And if America falls apart while we do it – most Christians accomplished their work in crumbling, oppressive, flawed governmental systems. This isn’t to say we neglect our duties as citizens, or that we cease to stand up for the oppressed among us. It’s a call to biblical priorities.

We do not need America to be better Christians. We need Christians to stop prioritizing a better America.

If we are more conservative, more Republican, more American than we are Christian, we will start to defend people who further our political agendas even when it costs us our Christian witness. It’s what happened to Jerry. It’s defaming Liberty University, a place near and dear to my heart. And it will happen to every person who places their hope in an earthly power rather than an Almighty God.

So here are five things we can learn from the Liberty University debacle:

For those wondering, the words and actions of Liberty’s president do not reflect the sentiments of MOST students and alumni. This article is not about Liberty; it’s about Liberty’s president, whose opinions are not shared by many students and employees of the university. I believe Liberty is still one of the best institutions of higher education in the nation and would still encourage students attend, president notwithstanding.

← Is the "Better Person" You're Becoming the One Jesus Wants? Weary in the Center of God's Will →
0
0
Your Cart
Your cart is emptyReturn to Shop
Continue Shopping