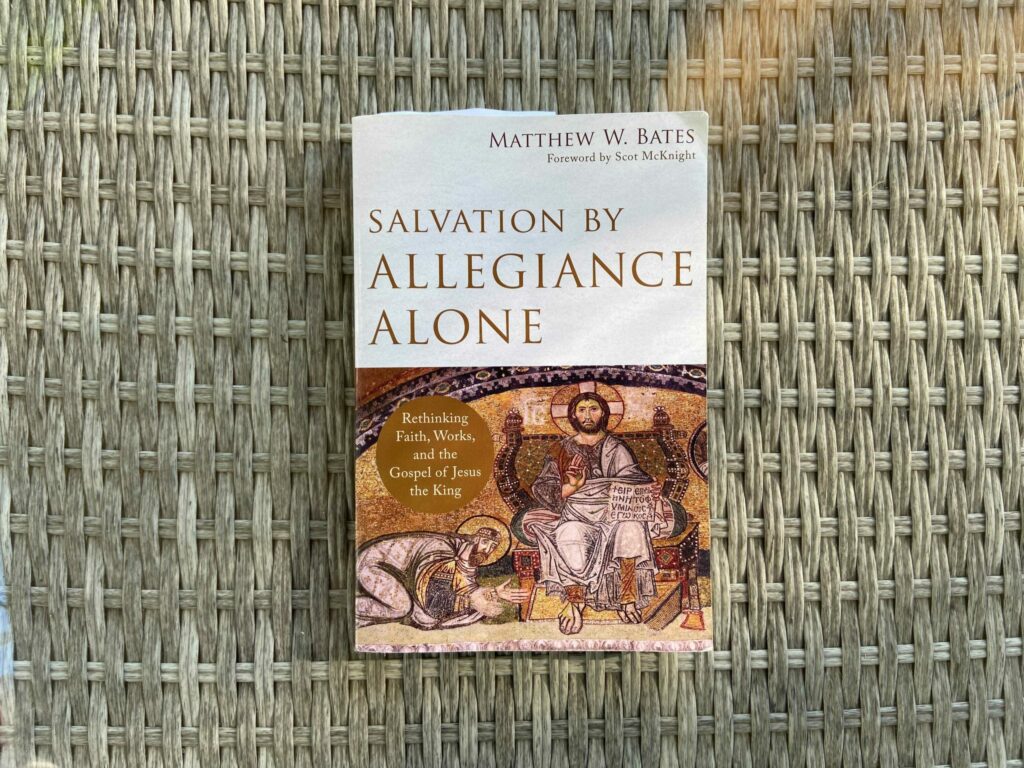 When I’m asked for the top five books I’ve ever read I always struggle to produce the list. What genre? Can I rotate them? How do you CHOOSE?? But no matter what “top five” list I might be asked to produce, this book would be on it. There is a thougthful, measured truth to this book that few authors can accomplish. There is patience knowing he will be misunderstood and probably misquoted and a painstaking manner in which he argues his point. But most of all, his effort to discuss the nature of faith and the difficult theological issues that arise from this single question does not go unnoticed. That’s why I made sure to put this on my list of books to review – more people need to know about it!

Salvation by Allegiance Alone probably makes a few people a bit wiggly when they see the title because we’re used to the Five Solas (grace alone, faith alone, Scripture alone, etc.) and none of those Solas mention the word “allegiance”. But actually… one does. Sola Fide, or “faith alone”, links us to Matthew Bates’ topic. He argues that how we define “faith” results in either an authentic Christian life or one riddled by uncertainty and lack of fruit. If “faith” is just a vague mental assent (“I asked Jesus into my heart” or “I believe in Jesus”), nominal “Christians” should not surprise us. But what if faith – as Jesus and Paul and Peter describe it – isn’t just “belief”? What if it’s more than that?

Bates attended three different schools: Whitworth University (Reformed), Regent College (normative Protestant) and University of Notre Dame (Catholic; this is shared on page 6). This beautiful synthesis of Christian theological views is evidenced in his nuanced approach to faith. Where these three camps often butt heads and throw hands, Bates combines the best of their respective hermeneutics as he talks about faith, works, and salvation.

This is a book about doctrine, but it’s also a book about Christian life. Orthodoxy and orthopraxy, you might say. Perhaps I loved this book so much because its direct impact on daily Christian life and evangelism is so apparent; whatever the case, it is heavy on doctrine because it deals directly with how we define faith and grace and how faith, rightly understood, transforms us.

In the foreword to the book Scot McKnight writes:

“Allegiance, then, is at the heart of grace as it was perceived in the ancient world. Grace was not simply – or ever – a pure gift in spite of what some say today. One must define terms by their usage not by our contemporary beliefs or usages. Grace can be both one hundred percent gift and at the same time summon the gifted person with an obligation, a heartfelt and intentional duty, to respond in gratitude and behavior in accordance with the new social bond… Grace in fact required a life of gratitude, praise, and… allegiance to Jesus as king.”

This concept is not new. Dietrich Bonhoeffer in his famous work The Cost of Discipleship contrasted biblical grace with the cultural “Cheap grace”, a grace divorced from any obligation to change. What Bonhoeffer was getting at answers the question we face in relationships today: If someone’s life doesn’t change after a profession of faith, are they saved… or not?

Though Matthew Bates didn’t set out to answer that question specifically, his treatment of faith and grace answer it for us. If faith is just a mental agreement that Jesus is God, requiring nothing more, unchanged “Christianity” is to be expected. We certainly see it all the time. Bates argues that faith is not just mental assent. Instead, it is a recognition of Jesus as king (which is the climax of the gospel) and submission to his kingship, resulting in a lifestyle of sanctification. In other words: if you truly put “faith” in Christ, you’ll submit to Him as king, and your life will begin on a trajectory of change. There is no faith where there is no allegiance, because faith and allegiance are the same.

In the very first chapter Bates explains what faith is NOT, a helpful distinction regardless of what church tradition you hail from:

Of these, his short section on why faith and works are not opposites is, I think, most important. He fleshes this out in detail in chapter five. He says:

With this version of the gospel [works and faith pitted against each other] which involves several dangerous distortions, good works end up playing a confusing dual role of friend and foe. Good works are “friend” because they are believed to flow from the more primal response of belief and are evidence of genuine faith. In this way, it is still possible for those who adhere to this system to affirm James 2:26,  “faith without deeds is dead,” because good works are felt to emerge spontaneously from the wellspring of faith. Yet good works are “foe” because they can all too easily lure us, seduce us, become our false security blanket, causing us to rely on ourselves for our own salvation.” (page 21)

In “Loyalty and the Full Gospel”, Bates fleshes out the story of Christ and what portion of the gospel our faith should be directed toward. This seems abstract, but it’s important. The kingship of Jesus as the climax of the gospel is an often overlooked point. He says:

“It is also critical to recognize that “faith” is not primarily aimed at trusting in the forgiveness of sins process. For Paul does not primarily call us to “faith” (or belief or trust) in some sort of atonement system in order to be saved (although mental affirmation that Jesus dies for our sin is necessary), but rather to “faith” (allegiance) unto Jesus as Lord.” (page 39)

This chapter depends heavily on Scripture to drive home this point: faith is loyalty, or fidelity, in its Scriptural context. Together with the concept of Jesus’ kingship (evident in all of the NT) this translates as an attitude and lifestyle of allegiance to Jesus. Viewing faith this way removes the “me centered gospel” we’ve seen in the last thirty years of western church culture.

The following five chapters flesh out the nuances of this concept, with one chapter devoted JUST to objections and questions. Toward the end of the book, Bates then talks about justification and allegiance, resurrection and new creation, and how to live out an allegiance-define faith.

Those who will struggle most with this book’s theology are Christians in the Reformed community. I would still encourage them to read this book. It is a an exceedingly well-thought-out argument synthesizing multiple Christian traditions (which in this case is a good thing, mostly because Bates ascribes to orthodoxy). Bates knew he would get push back from the Reformed sector and takes great pains in his two Q&A chapters to address the inevitable questions. Even if you come away from the book still disagreeing, it will be worth your time to understand Bates’ stance.

As for the content of the book, my best recommendation is to be decently versed in basic Christian Theology before diving in. The average lay person would probably be a bit overwhelmed, but if you have a handle on the essential differences between Calvinistic and classical Arminian theology (as well as some acquaintance with Catholic salvation theology) you’ll be helped when you read Salvation by Allegiance Alone.

Perhaps the most helpful thing about this book is how it opens doors to issues you wouldn’t normally think about. I didn’t realize how often I wondered about the relationship between faith and works until I picked this up. It gets to the root of “salvation decisions” that bear no fruit. It talks about the me-centric “gospel” and elevates the kingship of Jesus, something we don’t talk about a lot.

Whether you’re a seminary student reading this on a break or a stay at home mom wanting a little mental challenge, this book is a fantastic read. The chapters aren’t too heavy and it’s still approachable even though the content is deep. I, for one, am immensely grateful to Mr. Bates for writing this book and leading us all to a better understanding of faith in Christ.