Lust and the Christian Woman 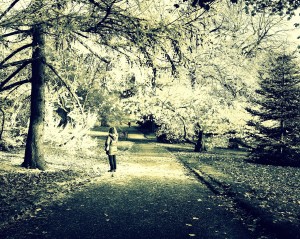 The tears spilling onto her keyboard – I could almost see them.

I could hear the anguish in the words she typed, backspaced, and re-typed.

I could feel her heart, aching and burdened, reaching out to me – the faceless Internet name – just to have someone to talk to. Someone who might understand.

I received that email a long time ago now, but she – the writer – has been housed in the back of my mind since that day. I know she isn’t the only one who feels this way. I know there are many more girls out there – good, Christian, by-the-book young women – who have the same questions she was asking. But they don’t dare ask.

There is a stigma when it comes to lust, as applies to the life of a Christian woman.

“Men struggle with lust.” We nod and accept, pointing to verses to help our husbands, sons, and boyfriends. We construct standards and preach against pornography, all of which are good, much-needed endeavors. But then there are the women: watching, as it were, from the sidelines of this battle against lust, wondering where to get help, who to talk to, and altogether too afraid to admit that lust is our problem, too.

I don’t think this is intentional; I think simply because men are visual beings, sexual lust is an understood temptation for them; whereas women, the pigeon-holed emotional beings, are looked on as pseudo-men if they admit they have a lust issue. But lust is lust. Sin is sin. It simply looks different in the lives of women versus the lives of men.

Writing this post (the first of series) is hard for me to do because it requires dangerous transparency. Many of my own friends and family read this blog. I’ve prayed and considered this series for months, hesitated to research and write it, talked about it with Mr. M, and finally decided that this message is one all my readers must hear.

The Oxford English Dictionary contains a long list of definitions for lust, including but not limited to:

Lust, by definition, can apply to any object of such unbridled desire, but in this context we are talking about sexual lust. In Scripture, we see lust mentioned periodically, but it is more widely recognized by its fruits: sexual immorality, adultery, and the carnal mind.

I am writing you as a Christian woman writing to other Christian women. Even in the church, you will hear teachers exclaiming over our ‘God-given freedom’ to celebrate our ‘God-given sexuality’ by indulging in the periphery of lust. This requires us to go to God’s Word and see if He indicates that lust is, in His view, a sin.

If we are to fulfill God’s will, which is for us to be holy (1 Thess. 4:3-8), the definition and fruits of lust cannot be found in our lives. Therefore, lust is a sin. Lust is wrong.

Why is Lust wrong?

What did Jesus say about Lust?

God ordained in the Old Testament, as a part of the Ten Commandments, that His people be free from adultery. But Jesus took this mandate a step further:

Jesus addressed the core issue behind adultery. He cut to the chase. He got to the root of the outward behavior. “If you are willing to look with lust, you’re eventually willing to act with lust,” He said to the legalist Jews, who perhaps stood nearby, chewing their nails and plotting against Him. “And if something is hindering you from purity – rip it out of your life! It is better to bear that loss than the loss of your holiness in God’s eyes.”

Sex is God’s Idea; Lust is Not

In Christian circles, an affair is a devastating thing (it is devastating in any social circle). But the same behavior that would constitute an affair in marriage is accepted, breezed over, and even endorsed by young Christian men and women in relationships across the globe. We would never touch a man – not our husband – that way. We would never be alone with a man – not our husband – in that situation. But we allow it as single women, because lust lies.

Sex is God’s plan; lust is not. Lust is Satan’s twist on God’s perfection; the ultimate slap in His loving face.

When does Affection become Lust?

When our desire for physical affection outraces our desire to act consistent to our Christ-won righteousness, affection has become lust.

That may have been a little confusing, so let me explain: a Christian woman wears a cloak of righteousness, given to her by Jesus when she accepted His propitiation (substitutionary payment) for her spiritual debt to God. Now, she behaves righteously because that is who she is: anything else would be below her justified status. Milton Vincent describes this status perfectly in his book, The Gospel Primer:

“Quite literally, the righteousness that God credited to me became my master on the day I was converted! And now I am daily called by God to surrender the members of my being as slaves to do whatever this righteousness dictates.” (Vincent, 21)

Righteous actions (purity) are the result of simply surrendering to the imputed righteousness of Christ on our lives. Therefore, when we choose to sin we are acting contrary to the new nature given to us. It is a choice we make; it is going backwards.  When we choose physical gratification over holy resistance to sin, we are silently abdicating our daughter-of-the-King status for temporal satisfaction and man’s approval.

Lust is tricky. Lust dresses itself in love, speaks kind words, and even comes in the form of godly men – men who have weaknesses. Just as women who love God secretly struggle with lust, so do men who love God. And the devil loves to see those weaknesses play against each other to the destruction of what would have been a powerful couple for God. As love grows, affection grows, and physical attraction becomes stronger with time. Many Christian young women get into relationships with high hopes for purity, only to discover that the very man they love is their worst enemy in this battle. She can’t seem to resist him; he can’t seem to resist her. The graying lines between love, affection, and lust cause confusion, and in many cases, compromise.

So in the name of ‘love’, we stand in the dimness and disrobe of Christ’s hard-won cloak of white, picking up the dirty remnants of a past life to hear for an hour what He has spoken over us for a lifetime:

You are so beautiful.

You are desired by Me.

How does a woman fight against Lust?

We fight off lust by understanding two concepts:

Who You Are: How convinced are you of your identity? The more insecure or unsure you are about your role in this world, your person, your looks, and your purpose, the more readily you can be swayed by the voices of the world. Insecurity sets us up for manipulation. Insecurity demands affirmation in order to survive. One of the foremost contributors to sexual compromise is a desire for affirmation: a longing to be told we are beautiful, to be convinced of our worth by male attention (which our culture brands as the currency of feminine value). But a woman who is completely convinced of an identity that transcends ALL human opinion will not need affirmation from anyone. She will be secure, stable, and immovable. She will not be tempted by lesser things because she knows who she is and she knows the God who saved her.

Who God Is: How convinced are you that God is a loving God?  For many girls, a poor human father has distorted their perception of God the Father. But we must divorce what we know of fallible man in order to understand in faith who this perfect Father God says He is. God is love. And He loves you, or He would not have taken the time of creating you and putting you in this world. As my pastor said last Sunday – He not only loves you, He likes you. This all may seem trite and repetitive for a Christian girl, but listen to me: what you think about God will directly influence what you think about yourself, and what you think about yourself will influence how much of yourself you are willing to give away for free.

Believing we are women loved by a God who is our Protector, Provider, Defender, Father, and Friend should elevate us to a level from which we refuse to step down into the muddied waters of polluted sexuality.

Our God says He loves us. If you don’t believe me, read His words:

When God tells us to avoid the ‘lusts of the flesh’ and the ‘lusts of the eyes’ (1 John 2:16) and not to ‘love the world’, it isn’t because He wants to spoil our fun. It is because there is a much greater love available to us than the love of the world (which is lust), and He doesn’t want that magnum opus love cheapened by faulty predecessors.

I went to my wedding day a virgin, and my first kiss with Mr. M was at the altar. But lust is insidious, and even with a testimony like mine, there were instances of failure, sin, and pushing the peripheral standards into the realm of guilt and condemnation. I know the temptations. I know what it feels like to be the Christian girl wondering what to do with desire, and I know there are many more girls navigating the stage of life I am now past. Perhaps you are like the girl who sent me the email, anguished in heart over what she knows is wrong, but with no hope for a way out.

There is hope. It is not too late for you. No stigma is too strong; no stain is too dark for Christ to wash away. Hold on to who He says you are, and remember who He is.

Sexual Freedom and the Christian Girl

Is It Too Late For Me?

← Does It Really Matter How I Live? The Purity Ring is Not the Problem →
0
0
Your Cart
Your cart is emptyReturn to Shop
Continue Shopping