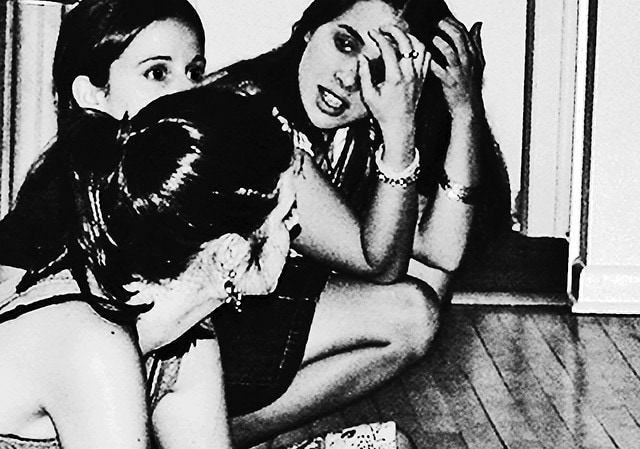 In my early teens, my bookshelf included such titles as:

I liked to read about relationships (in that sense, nothing has changed; I’ve just developed a more grown-up taste of biographies of famous married couples) and read all the above titles, plus more. I grew up at the height of the purity movement: a church-led initiative encouraging commitments to abstinence, intentional relationships, courtship and purity rings. My dad gave me my ring at age 13, and most of my friends had one, too. I thought I had relationships figured out.

And then I got into a relationship, and I discovered that not only did I not have it figured out, but there were capabilities within me directly contrary to all I had ever learned.

As I wrote about in my post Prone to Compromise, every young woman – regardless of her background – is susceptible to compromise when given the opportunity. Many Christian girls postulate about relationships from the pedestal of singleness, only to find that navigating an actual relationship with a man is much different than the formulas previously set out. These girls are home schooled, Christian schooled, church-raised, and come from solid families. To those closest, they have ‘no excuse’ to abandon everything they know about God and His plan for relationships.

Church friends and family whisper tearfully over the runaway daughter; emails confide in grandparents of the baby that is coming – no one had any idea. Parents stay up late trying to sort out why their daughter has rejected everything she was taught for a guy she would have never considered in her earlier teens. The church is baffled when good girls give in to lust.

And voices ring out, “I told you so!” Chortling with glee, liberal Christians and the world link arms to announce the demise of the purity movement and its utter failure to meet young people where they are concerning sexuality.

The Ring Told Me What to Do

In The Lord of the Rings, Gollum, an emaciated once-hobbit spends all his time worshiping the Ring of Power. Everything he does is dictated by his obsession, and in the end the ring kills him. That is how many girls feel about the binding power of the purity ring.

Perhaps in emotional decision, pressure from parents, or even out of a genuinely hopeful heart many girls have donned a purity ring in their teen years. Most girls I know at Liberty University – my alma mater and my place of employment – wear a ring on their left hand signifying their commitment to purity. It is a reminder to themselves and to potential suitors of their commitment to God.

But I’ve seen dozens of girls reach the limits of hope, and in their late teens or early twenties rebel against everything the ring stood for in a desperate effort to be ‘individual’. Some rip it off with Miley-Cyrus-brashness; others quietly slip it off, never having believed it anyway. And some live a lie until their guilt forces the ring into the obscure places of a childhood jewelry box. I’ve met some bitter, angry, hurting girls who abhor the purity ring and all it stands for because it didn’t work.

It didn’t bring them lasting love. The waiting didn’t pay off. Other purity-ringers were a ‘bunch of legalists’. The purity ring was an ‘idol’. The accusations go on and on, but all of these are simply an army of straw men erected in front of the truth.

The purity ring is a symbol of a principle: a principle which is only as good as the girl who believes in it. But when a young woman divorces the principle from its source (God and His absolute truth) there remains no reason to wear the purity ring or uphold what it represents.

I Never Believed It Anyway

In his book Already Gone, Ken Ham illustrates exactly how many Christian young people are leaving the church:

“…Most [young people] are pulling away from the church, are spending less time alone studying their Bibles, are giving very little financially to Christian causes, are ceasing to volunteer for church activities, and are turning their backs on Christian media… What does this look like numerically for today’s 20-somethings?

The purity movement, umbrella-ed – for the most part – by the church, is a case study in a much larger cultural shift. The same reason young people are rejecting the church is the reason young women are throwing away their purity rings and giving up on godly relationships. Something was promised to them, and that promise was not fulfilled.

What was the promise?

But what happens when a girl leaves home, or enters her first relationship and finds:

Disenchanted and disappointed, brokenhearted girls become bitter. Bitterness become resentment. Resentment becomes rebellion, and these young women reject it all because ‘what was promised’ didn’t come to fruition. I personally believe these ‘promises’ are the cause of young women fleeing the movement, because these assertions – quiet and unspoken though they may be – are extra-biblical.

The Bible does say, “The pure in heart will see God,” (Matt. 5:8) and with the pure, God shows Himself pure (Psalm 18:26).  But the rewards of purity – like the rewards of following Christ – are first eternal, and then material.  When we promise young women the ‘rewards of purity’ to bribe them into wearing a ring, we set them up for false expectations. We make the commitment to purity conditional. This spiritual bribery encourages virtue simply because we want something out of it: a relationship. When the relationship doesn’t arrive, many girls dump the purity concept for peer approval, status, and physical intimacy.

We also sell a lie when we say that by honoring God in our relationships, they will always go the way we hope. Three men asked to court/date me before my husband. All of those relationships ended – certainly not the way I planned when I first met those gentlemen, but that was God’s will. Committing to purity requires patience, endurance, and self-control. It is neither easy nor popular. Attempting to make purity seem trite, simple, or ‘what church girls do’ demeans this virtue that is so rare and precious. Purity is for the strong. Purity is for the self-controlled. Purity is for the valiant women of this world.

Finally, it is true that sexual temptation is constantly present, and it is also true that waiting until your wedding day provides a most beautiful, intense, fabulous way to start out your marriage (not to mention blessed by God). But there are hordes of young women, raised in the church, whose walk down the path of impurity began with a simple kiss.

A kiss seems like an innocent thing, easy to give and easy to take. But you don’t kiss just anyone – do you? A kiss is an intimate and lovely thing, but once given away it is easy to give more and more. One thrill is no longer enough. You have to do better than last time. I’m not saying that girls who have kissed before marriage are lesser beings (that would eliminate me and many of my closest friends) but that we should take every physically intimate action very seriously. Your body is not yours: it is God’s. It is not a man’s until he is your husband, if you believe what God says about marriage.

So these girls, sold on half-truths or fearfully bribed into committing to purity for the wrong reasons, don’t even believe what they say they subscribe to. They know it is right; they know it is God’s plan. But inside, God seems distant and unrewarding. But they wait for the material rewards to show up, in hopes those will fulfill their dreams. When those take too long, the ring is cast aside with everything it stands for.

Am I the Only One?

As Christian girls, we look to the left and right and see our friends compromising on every side and begin to wonder: am I the only woman doing this? It seems as if there are only two extremes: the Duggars, who don’t even hold hands during dating; and the rebellious once-churched 20-somethings who justify everything short of intercourse. Is there a middle ground?

Yes, and the middle ground in Christ.

The purity movement and the purity ring are not pushing young women away from God’s plan. They reject it all because they never knew the God who designed purity in the first place. I’m not saying these girls weren’t saved. I’m not saying they don’t know the truth inside-out and backwards. I’m saying that these girls did not know God as the loving, fulfilling, kind, patient God that He is, so his ‘purity rules’ had a time limit.

Growing up, when my dad asked me to do something, I generally wanted to do it because I had full confidence that he loved me. I knew that if Dad asked me to do something, he had my best interest in mind. He wasn’t looking for me to fail or ready to jump on my case if I messed up. I had a relationship with my dad, and that relationship resulted in confidence, and that confidence resulted in obedience.

Girls reject purity because they don’t believe God designed it for their protection.

Girls reject purity because they think they are missing out on something better.

Girls reject purity because they don’t believe God’s approval is greater than man’s.

Christian girls reject purity because they do not trust God.

Without faith in God, trust in His character, and confidence in His promises, young women will reject every rule of Christianity because without who Christ is, Christianity is empty. The only way to stand on purity is to stand on the middle ground of Christ: unshifting, immovable, stalwart, eternal. Forget Christ: forget purity.

With this in mind, it is not so surprising that Christian girls give in to lust. We need to go deeper than the surface view: youth group, church attendance, worship team. We need to look at the hearts of our daughters, sisters, and friends. Is this an external commitment, or do our girls know who God is? Do they love who God is? Is He hope, peace, fulfillment, love and security? Or is He judgment, legalism, condemnation, and fear?

God has said who He is. When we let the devil twist Him into an ogre of anger and rejection, we are one step closer to compromise. But when a girl loves and serves a good, kind God, the last thing on her mind is her purity timeframe. She will wear her ring as a badge of honor, not as a binding weight. She will wait patiently for God to bring her the right man instead of trying them on for size, or being tried on and thrown away.

Girls, you’re not the only ones in this battle. There are hundreds of other young women – not just the ultra-conservative faction, nor just the young men of the church – fighting this with you. But it is a fight. Purity doesn’t just happen; it isn’t something you just ‘do’. It is a commitment that requires saying no to self and saying yes to God. But when you serve an amazing God, the sacrifice is worth it – and as a married woman who looks back on years of both mistake and victory, I can second this with a resounding ‘Amen!’.

Trust God. The strongest women are those who trust Him most.

Have questions? Visit the ‘Ask Me a Question’ page at the top of the blog to contact Phylicia!

Sexual Freedom and the Christian Girl

Is It Too Late For Me?