Can Girls Have Guys as Friends? 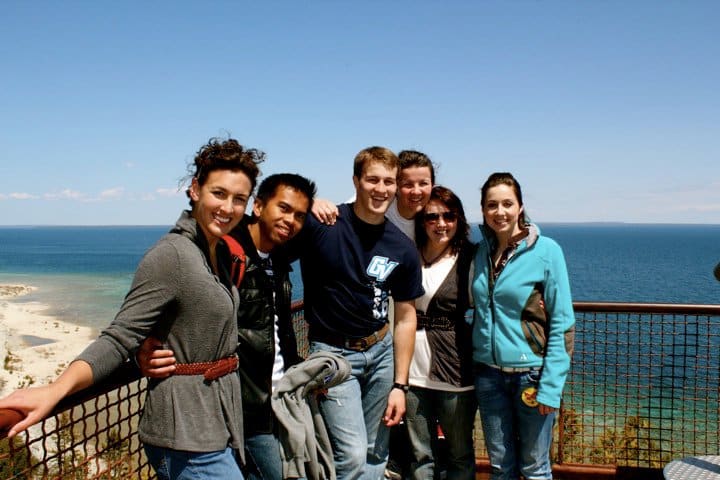 With a stack of books about John Calvin at one elbow and a higher stack of commentaries for the Book of Daniel at the other, I collapsed into my laptop face first. Mr. M looked over the edge of his iPad. “Is something wrong?”

“No… I just finished this infernal commentary on Daniel 9. If I ever hear the words ‘seventy weeks’ again, I might do something inappropriate.”

“Well, we don’t want that,” My husband replied with all the concern of sleepy pigeon (don’t ask me where sleepy pigeon came from… but now that I’ve compared him to one, I can’t stop chuckling).

I opened my personal email as a reward for such academic labor and was greeted by an email from Bria of Germany. She asked:

“I’m single, and know how friendships function from my singles’ perspective, but I wonder how you view them now that you’re married?  Do you feel it’s easier/harder/better/different having male friends when you’re single versus married?

Her question, spawned from my Speaking and Travel page, was inspired by the presentation Can Girls Have Guys as Friends? This presentation was very popular at the convention in Michigan at which I first presented it, but I realized I never wrote a blog post about it. Thanks to Bria, coffee, and an overdose of Daniel 9, here it is.

To some, this question is ridiculous. In fact at one time in my life, I would have agreed. But as I’ve watched friendships between men and women flounder, get awkward, and get ugly, I’ve realized there really is a right and wrong way to go about these sensitive relationships. There is a God-designed way for every relationship – even friends.

Ultimately, it’s not about the ‘if’ as much as it is the ‘how’. Can you have guys as friends? Indeed, it is physically possible to have acquaintances of the male gender, body odor and beards to boot. But how does that look in the life of a Christian woman?

Embrace Your Identity as a Lady

Dating in our culture has major issues – without even delving into the sexual side of things. I’m might step on a few toes here as I relay to you what I believe – from study, prayer and experience – to be the most important qualities a young woman can pursue in her relationships with men.

Patience is the ultimate game of ‘hard to get’, except you aren’t playing a game – you’re trusting God. I don’t care how blurred our culture tries to make the gender lines:  men who seek God, who love God, and who want to be leaders do not appreciate women who chase after them. I was a girl who had many guy friends growing up – upwards of 40 – and I can count on all my fingers and toes how many times they expressed their frustration to me about girls who made themselves too available. Godly men respect women who respect themselves. You can be his friend – but don’t be his suitor.

Flirtation and Friendship: A Fine Line

For extroverts like myself, flirtation can be very unassuming. I am happiest when I can make others laugh. However, as a married woman I have to be careful I don’t place higher priority on making people laugh than on making people aware of my loyalty to Mr. M.

Before marriage, we also have a responsibility – not to our husbands, but to ourselves and to God. We have the responsibility to consider if what we are doing, saying, or acting out is done for God’s glory or man’s attention. Is what we are saying manipulative or gossipy? Or is it for the mutual upbuilding of a friend?

This should serve to encourage us to check our own hearts – not start an undercover flirtation watch on the women around us. And as a bubbly extrovert I’m not about to tell any woman to stop laughing, joking, or being the life of her party. What I do encourage young women to consider is the manner in which we communicate to male friends. How would you talk to him if he were married?

And that brings us to our next point.

Very likely, at some point down the road, your guy friends are going to be married. That means somewhere out there in the wild blue yonder, his wife is living and breathing. Are you treating him in a way that honors his future wife?

My husband, Mr. M, had as many girl friends as I had guy friends before we were dating. It was an adjustment for us both when our exclusive relationship required we cut back on communication with friends of the opposite sex. It was also an adjustment for his girl friends, some of whom did not understand why he was no longer initiating contact with them or conversing with them on a regular basis. Some of his girl friends, however, made an effort to ask about me and respectfully minimized contact with my then-boyfriend. Now as his wife, I look back on that with great appreciation.

I also had to make adjustments. Even though most of my guy friends were nothing more than brothers in my eyes, I minimized my contact with them and when I did answer a call or a text, I told Mr. M about it. I didn’t do this out of fear or because my husband is a jealous person: I did it out of respect and transparency. Complete honesty and open communication are essential when it comes to friendships with the opposite sex. When we start to hide things, we’re on the track to destroying our marriage.

That said, even after marriage, Mr. M and myself keep in contact with our girl and guy friends. We’re not about to eliminate them just because we are married! But we do tell each other when we talk to these friends, share our social media passwords and phone log-ins, and keep everything out in the open. We don’t ‘meet up’ with our friends alone, and if they have a significant other we keep them in the loop as well.

So as a young woman, can you have guys as friends? Can you keep your brothers as companions without emotions getting involved?

The answer is yes.

The guidelines after marriage – being open, honest, transparent, and respectful – are the same guidelines that apply before marriage. Keep your head in the game and your heart in check. Be honest with yourself and be respectful of his future wife and your future husband. And most of all – be yourself. Authenticity is the cornerstone of true friendship.

So in answer to Bria: friendships with the opposite sex after marriage, from my experience, is very similar to friendship before marriage.  Before marriage, these gentlemen were my brothers in Christ and I wanted the best for them. After marriage, it is the same. It delights my heart to see them finding their wives, marrying, and setting up little homes, and Mr. M says the same of his girl friends. But it depends upon me to stay close enough to God and my husband that my behavior honors them both.

As women seeking to keep God #1 in our lives, everything – including friendships with guys – falls into place when we do it God’s way. Keep Him first, and wisdom while guide your steps.

Still have questions? Visit the ‘Ask Me a Question’ page to email Phylicia or request a topic to be addressed on the blog!

← You Must Use Words. Does It Really Matter How I Live? →
0
0
Your Cart
Your cart is emptyReturn to Shop
Continue Shopping