You Must Use Words. 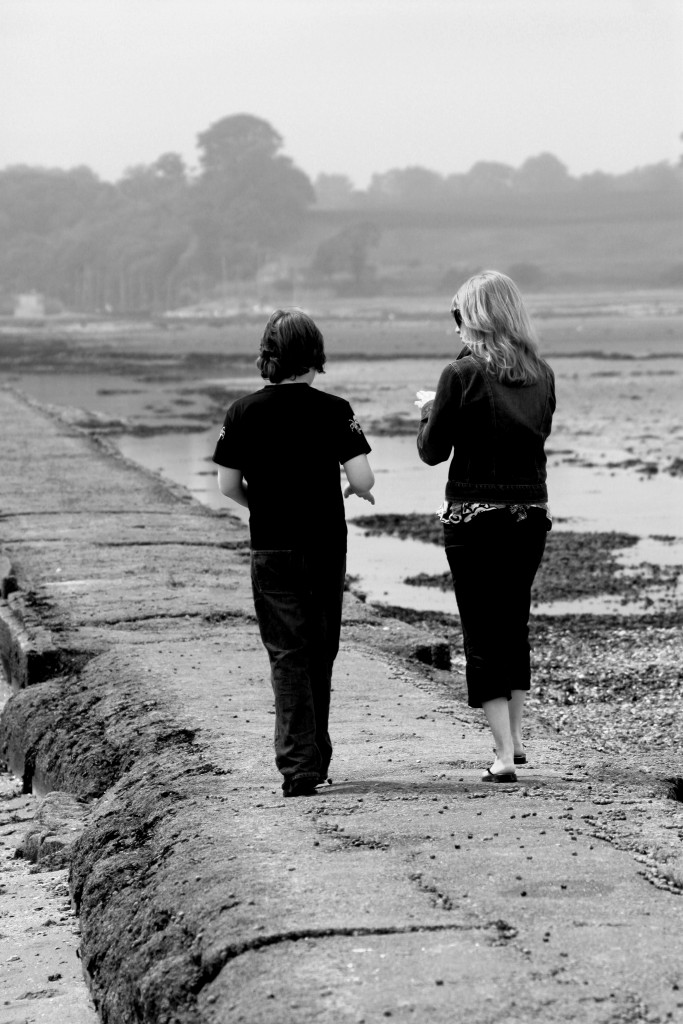 I leaned forward on the bus seat, staring forward through the massive windshield. Every College For a Weekend (one of four major campus events we do per academic year) I ride and monitor a charter bus shuttling students to an offsite camp for outdoor activities. And every CFAW I have the same bus driver: Jerry from Ontario.

In the eight hour day together I ask about his six kids, his wife, and life in Canada; he asks whether I bought a new car, how married life is going and how large this event will be. We work together every two months for one day. He enjoys his trips to Liberty University – the world’s largest Christian university – and requests to come to campus when we need the bus.

Jerry is not a Christian.

There is a commonly quoted phrase by Saint Francis of Assisi: “Preach Christ, and if you must, use words.”  The concept of this statement encourages us to live a life that in itself proves Christ is real, whether or not we ever open our mouths.

He had a valid point, worthy of emulation. But while I’m certainly no Saint Francis, I’m here to tell you that when it comes to the gospel in today’s culture,  we must use words.

We live in an age of pay-it-forward tolerance and niceness, God-bless-you-sneezes and gas station devotionals. We live in a time where good manners and generosity are not characteristics monopolized by church-goers, but are traits cultivated by do-gooders across the globe. Wordless kindness is nothing more than humanitarianism. Unexplained generosity and goodness, by itself, does not preach Christ.

Can God use it? Definitely. But in today’s culture, kindness and voiceless cause-chasing do not identify us as Christians. In fact, I have seen as many atheists, deists, spiritualists and narcissists volunteering for the underprivileged as I have seen Christians doing the same. The gospel is not preached by character alone.

The gospel must be voiced.

We think evangelism – we, Christian young women of America and the world – and from our apartment living rooms start seeing ourselves handing out tracts at a downtown coffee shop. ‘Friendship evangelism’ takes on greater appeal as we hope our friends see Christ in us simply by our standards of life and living… though we never dare talk about our faith. It’s hard! It is undeniably hard to risk losing friends by voicing the gospel. But it is a risk we have to take when we confess the name of Christ.

‘Friendship evangelism’ has two veins; the first is the aforementioned ‘look at my life and believe’ method. The second is what friendship evangelism should be: coming to know someone so well that not only do they see Christ in our character, in our lives, and in our priorities, but they hear Christ in our words. They cannot escape knowing the source of our confidence and peace in this life. They can only escape the gospel when they escape us!

Think of Philip, in the book of Acts. Running up to the chariot wheeling an Ethiopian eunuch down the road, he asked him, “Do you understand what you are reading?” (Acts 8:26-40) It was a personal question and a personal encounter which Philip then used to preach the gospel. The gospel is preached as we seek to know people: to bring them into our lives, acknowledge them, and give them the gospel at the appropriate time… using words.

Jerry and I never see each other except at CFAW, and prior to this last event we’ve spent two eight-hour days (in the span of six months) riding back and forth on a charter bus, chatting. That’s it. He is thirty years my senior with strong opinions about guns, politics, and childbirth; I’m a 23 year old Liberty employee just doing my job. But as I’ve gotten to know Jerry, I’ve realized that he thinks very critically about life. He’s not just a bus driver cruising North America. He is asking hard questions.

“I don’t know about it all though,” Jerry was saying as he wheeled the massive bus down a gravel road. “I mean, we’re all ending up in the same place anyway, that’s what I think.”

I was quiet. Then I asked, “But Jerry… what about the serial killers? We just talked about them earlier. Are they going the same place too? That’s not very fair.”

He snorted. “No, it’s not! But I mean, what’s the alternative? There’s some sort of afterlife but who knows what it is, and I don’t get to say where we all go. I suppose the same place.”

“It wouldn’t be just for a serial killer to receive the same ending that we do, do you think?”

Jerry laughed. “Well, no. But basically this earth is going to go through an extinction, and man just has to find another planet to go to and start all over. We aren’t the center of this universe.”

“Just for a moment Jerry, entertain a question – ” I teased, because I knew he liked to argue his opinions. “What if we were the center of the universe? What if a loving God made this world and filled it with people because he wanted a relationship with just them? No aliens, no other worlds. Just us, made by a God who loved us.”

“Alright. So we’ve been made by a God who loved us – don’t you think that in the end, when we die, he’d want us to have a place to go then, too?”

“Gotcha. But earlier you said that serial killing was wrong. Is it?”

“Alright, well what if to them, serial killing was right?”

“If their brain is telling them to do something it doesn’t mean that their soul is bad,” Jerry explained. “If you replaced their brain, they wouldn’t do those evil things.”

I paused. “So you are saying that they are not responsible for their actions because they are the product of a diseased brain?”

“Sure, and if they replaced their brain they wouldn’t be like that.”

“Alright, I see what you’re saying,” I replied. “But what if, right now, I punched you in the face? Would that be wrong?”

“What if I thought it was right?”

“You’d be wrong, and you’d say you were sorry right after.” Jerry was still laughing.

“But let’s say I didn’t. Let’s say I did it, and wasn’t sorry, and I thought it was right. The problem is that you think it’s wrong, I think it’s right, and a bunch of other people may think different things about it. Pretty soon none of us can say what is right or wrong, and there is no way for us to have laws or government. We have complete chaos. So you see, Jerry, we have to have a standard of Good from outside the human realm in order to navigate right and wrong. Without an ultimate standard, we have nothing to go by.”

He paused, then said, “That makes sense.”

“So let’s say there is this ultimate standard of Good. If God made heaven, then it must be perfect because is the ultimate perfect standard. If we aren’t perfect, then, we can’t enter that world when we die because we would ruin it. Even though we may think we are ‘good people’, we’ve all lied, cheated, stolen or done something to hurt other people. Any of these would disqualify us from entering a place like heaven. Right?”

“So because I am Christian, this is what I believe: God loved me so much – because he made me, why would he make me if he didn’t love me? – that when he saw that I couldn’t get into heaven in my sinful state, he reached down to me and made a way for me to be with him when I die. Instead of me working hard to reach him – with rules, traditions, prayers, and rituals – He reached to me and sent Jesus Christ. We believe that Jesus was perfect, God’s spirit in a man. When he was killed, he took the punishment I was going to have for the bad things I’ve done. He stood in my place. And because of that, I can live every day knowing my eternal destiny is secure, and I have God on my side every day of my life. I love him and pray to him out of gratitude for his gift to me, not out of rite and ritual. Does that make sense?”

Jerry smiled. “Yes it does. Thanks for the pep talk.”

“Don’t think of it as a pep talk… just think about it on your long drive tomorrow.” I laughed. “Now did you get that pair of sunglasses you wanted?

That’s an excerpt from a much longer dialogue, and I don’t share this conversation to get applause from readers or glorify myself: please understand that. But my heart is so burdened to communicate to young Christian women that it is not enough to silently live the Christian life. We MUST share the gospel! We MUST know the gospel! We MUST be able to give a defense for our faith! There are people out there we work with every day who know us as ‘good girls’ and never even know why.

Jerry could have left that day thinking I am no more than a nice college girl who makes conversation with him. He would never have known that Christ makes me who I am, and that in the midst of my loudest failures God’s grace sings a song over my life and saves me every day. A nice chat will never save a man’s soul from his eternal destiny.

I start to choke up as I write this because I fear for this generation of Christians. We are introverted about our faith and extroverted about ourselves. We think our good deeds and behavior are enough to testify Jesus and they are not. Seek to love and know those around you – yes. Love them and treat them well and be kind to them – yes.

And then tell them why you do it.

Tell them it’s Jesus doing it through you, not Mohammed or Buddha or a humanitarian cause. You can’t articulate that in action.

You must use words.

“For I am not ashamed of the gospel, for it is the power of God for salvation to everyone who believes…” (Rom. 1:16)

← 5 Ways to Survive When Your Husband Travels Can Girls Have Guys as Friends? →
0
0
Your Cart
Your cart is emptyReturn to Shop
Continue Shopping