Josh: God Will Fight For Us

I’ve been on Mr. M’s case for a while now to write a ‘feature’ for my blog. I’ve told him he’s an good writer, and his technical writing professor affirmed that by giving him in A in that class! I received an email today from Mr. M detailing his devotions from earlier this week, and took the opportunity to share his wisdom with my own readers. I hope you are as blessed as I was by his insight and explanation! 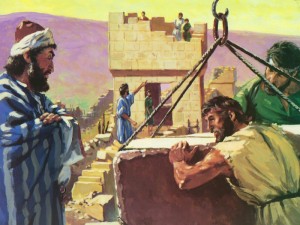 I was running one morning… and the question of “What should I read for devotions today?” randomly popped in my head. Then a voice in my head listed three references, saying “Psalm 51, Proverbs 3, and Nehemiah 4:7”. At the time I didn’t remember what those references were about, but I knew it was God telling me to read them. And so I did.

When I turned to Nehemiah 4, I found the offering envelope I had written notes from the men’s summit on. I already had notes on this chapter.  I read verse 7 but it was just saying that a list of people were mad about the wall of Jerusalem being repaired, and it didn’t really stand out to me. So I skimmed over the notes I had already taking at the men’s summit, still nothing that felt relevant though. My notes started at verse 13 so I started reading there and read to the end of the chapter but it wasn’t until I had read Proverbs 3 and Psalm 51 that I realized what God was trying to tell me. Once I realized it, I went back and took brief notes on all three references but made a mental note of what I wanted to write about to you.

Nehemiah 4 talks about how all the enemies of Jerusalem were infuriated by the Israelis rebuilding the wall and Nehemiah, when finds out about their anger and impending onslaught, orders that half the men be fully ready for battle and standing on guard while the other half worked but carried their load with one hand and a sword in the other. He also ordered that, during this time of rebuilding, there will ALWAYS be men on guard at night and those who did sleep didn’t even dress down for bed. They even brought their swords with them to get a drink. Nehemiah also ordered the men to spread out along the wall because they were rebuilding the WHOLE wall and were vulnerable on all sides but when they heard the trumpet call they were to come together to defend the part under attack.

This chapter spoke to me because of two particular things:

1) Nehemiah had the people rebuild the ENTIRE perimeter of the wall at once.

Even though they were spread thin, which left them vulnerable, they still built it all evenly instead of focusing on one side at a time. I believe that, in our own lives, we are to focus on every aspect of our walk with Christ. Working on every part of our spiritual strength in order to make it a better reflection of God. Then, when we are attacked, we can rally all of our strength in Him and use all of the resources and knowledge we’ve gained in the other aspects of our walk to fortify our defenses where the attack is the strongest. But Phy, when I came across a verse as I read along, I couldn’t help but let out a joyful, and almost impressed, chuckle. Verse 20 says:

“When you hear the blast of the trumpet, rush to wherever it is sounding. Then our God will fight for us!“

Wow. That’s encouraging. I can’t help but smile, thinking about how easy that sounds. I also thought to myself, doesn’t that make all the guards and swords and fear kind of pointless? That brings me to the second thing.

2) The people were ordered to ALWAYS, ALWAYS, be on guard.

Nehemiah was obeying the will of God when he ordered half the men to be dressed for battle and the workers to be slowed down by holding a sword in one hand. Couldn’t the wall have been built like THREE times faster if ALL of the men worked on the wall with BOTH their hands?? Nehemiah even told them that they wouldn’t be fighting anyway because God was going to fight for them. Why lose sleep on guard and sleep restlessly in fear of attack and in your dirty day clothes, soiled by the hours of labor. They were not only on guard day and night, they also worked from dawn to dusk, from the moment they wake to the moment they sleep. Why even build a wall at all if God is going to protect them anyway? The answer to this, Faith. It’s easy to just sit around and enjoy the pleasures of life and just say that God will take care of any problems. This is what I’ve tried not to do while at home. Because God wants us to be READY. He wants us to prepare ourselves for what is to come. He wants us to grow in wisdom and stature but, most of all, He wants us to grow in Faith. Faith in Him. He wants us to ever strive to be a clearer reflection of His image. He doesn’t expect us, though, to be capable of defeating anything that comes our way. For we will ALWAYS be weaker than the Devil. He is a supernatural being bestowed with the power God had granted him as an Archangel. That is why we can’t be as foolish to think we can defeat Satan and is crafty ways on our own accord. We are only expected to be READY. For the Devil WILL come for us. No doubt about it. He will come in the night, he will come in the day, he will even come when we’re getting a drink of water. So we must be on guard. But, when he comes, we must blow that trumpet. We must ask for help so that the troops can be rallied to aid in that area of our lives that Satan is attacking. If we build our wall, through scripture, through support groups, through our reliance on God. Then we will have a fully built wall, ready and waiting for the Lord to mount upon and slay EVERY last enemy from. Our load will be heavy with only one hand to lift and a heavy sword in the other. We WILL be weary at times from building our walls from dawn to dusk, never ending the time we spend in fellowship with God and believers, never ending the love we pour upon both those who help and harm us alike. Never ending the watch as we stand on guard for the enemy. And, when God see’s we are ready, He will vanquish all evil that comes for us.

When I began to read Proverbs 3 I realized that Jonathan Falwell had recently referenced it in his sermon about being a steward. But the rest of the chapter basically tells you HOW to rebuild your walls where as Nehemiah 4 tells us WHY we rebuild our walls. Verses 1-3 tells us to “Store [His] commands in your heart” so we are to memorize scripture so that we will have the resource of God’s word to use as our “trumpet” when the enemy rears his head. The verse goes on to say that we must “Never let loyalty and kindness get away from you!” This is basically love. We must ALWAYS emanate God’s love upon all of those around us because it is when we stop loving that God turns a deft ear to our “trumpets” in times of need. Verse 5 tells us not to lean on our OWN understanding. We’re not omniscient. But if we try to make sense of things, we’re going to get confused, and we’re going to sit there just thinking about something when we should really be DOING something. Life doesn’t make sense, plain and simple. But EVERYTHING makes sense to God, not just because He’s so gosh darn smart, but because He CREATED it ALL. He’s in control of it ALL. So, if He knows everything, and He is the one that’s actually in charge, why don’t we just trust Him to take care of things?

There will, naturally, be times that we fall short and sin. But there is a verse here that was and will always be encouraging to read once we’ve repented. Verses 11-12, say:

“My child, don’t ignore it when the Lord disciplines you, and don’t be discouraged when he corrects you. For the Lord corrects those he loves, just as a father corrects a child in whom he delights.”

Psalm 51. You know what that Psalm is about. I didn’t remember when I heard it referenced in my head that morning, but I soon did. Psalm 51 is the first step to all of this. Verse 18 even talks about rebuilding the walls of Jerusalem:

“May it please you to prosper Zion, to build up the walls of Jerusalem.”

When we sin, the enemy comes and breaks down our walls again. But we must repent and begin rebuilding. I read the references in reverse of how I heard them, perhaps that was to better understand the process. But it was listed to me in the way that I think God works sometimes: We must first repent, then we are told HOW to be restored, then He tells us WHY we must do what we did. God works in what seems like funny ways. But if we do these things, if we just obey God and prepare for what we KNOW will come, then God will fight for us. He’ll take care of everything. The hard part is just standing guard.

← In Light of His Glory Josh: God Never Fails Us →
0
0
Your Cart
Your cart is emptyReturn to Shop
Continue Shopping