Hope Always: How to Be a Force for Life in a Culture of Suicide [Book Review] 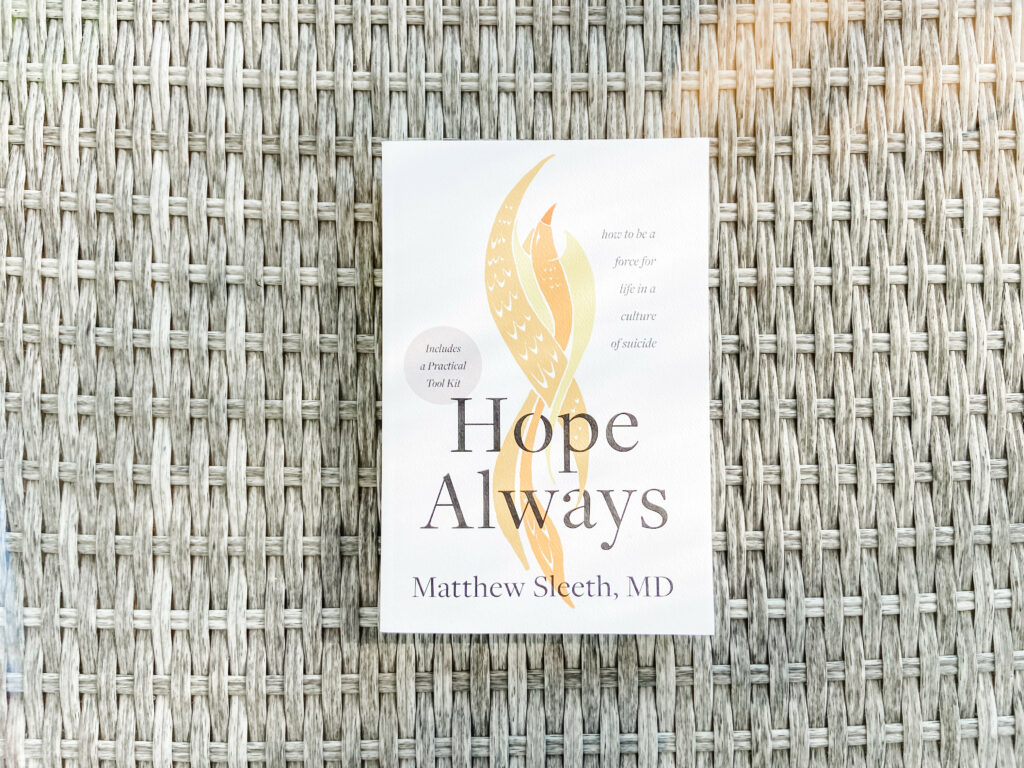 I first discovered this book when I heard the author, Dr. Matthew Sleeth, speak at a critical thinking summit here in Petoskey. His message was so powerful I knew I wanted to read his work – and when I arrived at his booth, he was GIVING his books away. I may have grabbed this book for free, but it is certainly worth your money and this review will detail why.

I have not read a lot of books about suicide. Part of this is due to my own limitations; I’m asked on a weekly basis to engage with extremely heavy, heartbreaking content, and I find myself unable to mentally process so much sadness on a daily basis. I take long breaks from certain topics and regularly quit fiction and nonfiction books that add too much to my compassion fatigue. I share this because Hope Always: How to Be a Force for Life in a Culture of Suicide is beautifully written but is not a “light” read. This is a heart wrenching topic and for those who have lost a loved one to suicide, it can be even harder to pick up.

This said, I think it’s worth your time. Dr. Sleeth is a former emergency room physician and chief of hospital medical staff, but he also came to Christ later in his life (his forties) after living as an atheist for many years. He brings a unique perspective as he combines biblical, spiritual authority with medical insight.

There is much addressed in this book and several things really challenged me as I read. But due to time and space, I will address what I imagine are my readers’ first questions regarding a book on suicide:

Sleeth spends a lot of time on what Scripture says about life, death, and our purpose in this world. One thing he points out about Satan was very stirring:

“It is a curious thing that even though Satan makes so few personal appearances in Scripture, and each time he does he is trying to get someone to kill themselves or someone else.”

Adam and Eve. Job. Jesus. The demon possessed man and the pigs. Judas. The pattern is made apparent: Satan hates life, and he wants us to think our lives don’t matter.

“In the past, the Roman Catholic Church had pronounced suicide an unforgivable sin. The reasoning was that a person must confess their sins in order for those sins to be forgiven. The sixth commandment tells us not to kill. The commandment could just as easily say, “Thou shalt not kill thyself.”… to murder oneself, therefore, is a sin. And by definition, one cannot confess this sin. Yet more than one suicide note includes the phrase, “God, forgive me.”… As we consider the question of “Is suicide an unforgivable sin?” I think it is wise to be prudent. Jesus is merciful, but suicide is a sin. It is disobeying God (who is for life), and it harms others, perhaps for generations.”

Sleeth ends this quote with reassurance from Romans 8 for those who are in Christ:

“I am convinced that nothing can ever separate us from God’s love.” (Romans. 8:38)

What about the mental health element? Perhaps one reason I enjoyed this book so much is because of the combination of medical and spiritual insight. Dr. Sleeth uses a whole chapter to explain different mental disorders and diagnoses while maintaining his dedication to orthodox Christianity and its role in healing those who live with these diagnoses. I think this alone sets his book apart from others on this topic.

For some people this book will be revolutionary. For others it might bring up heartbreaking memories. I think there are a few moments in the book where Dr. Sleeth could have come down a bit harder on medieval church approaches to suicide (e.g. hanging bodies of those who killed themselves on the city gates) – but I also understand why he only passingly addressed these. He is deeply concerned with the modern-day, cavalier approach to suicide. In the talk I attended, he assured us that it is only a matter of time until we will find materials to aid people in committing suicide for sale in our stores. As terminology changes to make it more acceptable and the world views suicide as a “life choice”, we will see a cultural shift to accommodate such a view. Dr. Sleeth takes a stance against this.

One of the best parts of this book is the last fifth. This section is to equip churches and laypeople to be a “force for life”. It is full of ideas for cultivating community, a sample suicide church policy, ways you can step into the life of someone who is suicidal, and contains lists of music, movies, books, and activities to encourage and uplift. In other words, he doesn’t leave you without an action step.

This is one of the most loving books I have read. Dr. Sleeth’s longing for people to know life and not give up hope is tangible. You can read it on every page. But he is also urgent. He senses that churches do not know what to do with mental health and suicide. He has stepped in with his skill set to help us learn how to make a change.

I think this would be a great book for church staff to read together, but it’s also a great read for the layperson.

← Arminian Theology: Myths and Realities [Book Review] Our Kids Won't "Ask Jesus Into Their Hearts" and Here's Why →
0
0
Your Cart
Your cart is emptyReturn to Shop
Continue Shopping