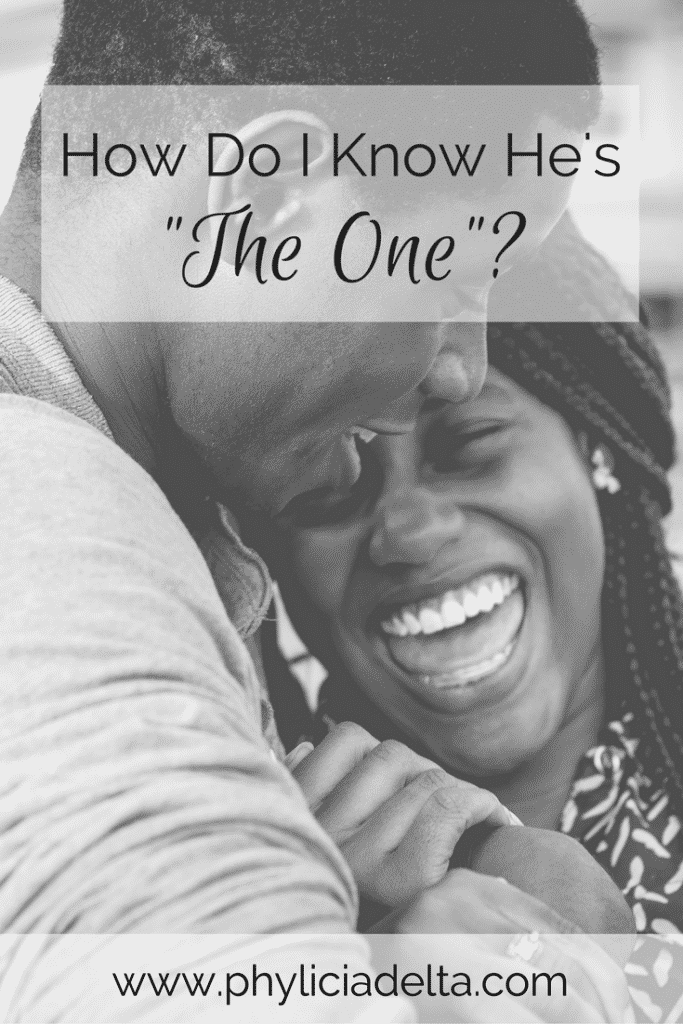 When I think about my relationship to Josh, there are days I ask myself why we ever got married.

Josh and I are not only opposite in personality, we don’t share any of the same interests or tastes. We tolerate one another’s music choices, movie preferences, and hobbies – and it’s always been that way. We laugh about how boring are the few mutual interests we share: eating food, working out, and – now that Adeline is born – playing with our baby. From the outside, we are an unlikely couple.

Both of us had multiple dating relationships prior to meeting one another. We could have chosen any of those men or women with whom to spend the rest of our lives, but we didn’t. Because of our differences, I’ve been asked several times: “How did you know that Josh was “the One”?

How can you know for sure that the man you’re dating is the one you should marry? You can start by asking these five questions before getting engaged; then take the following points into consideration.

There is no such thing as a “soulmate”.

This word gets thrown around in Christian conversations, but it’s not biblical. The idea that we each have a specific person in this world destined to complete us is rooted in Greek mythology, not in Scripture. If it were true, it would be possible to marry the “wrong person” – the one who doesn’t complete your soul (which was the concept behind the Greek “soulmate” ideology). Since God views each of us as individuals made complete through Christ, human relationships are not designed to complete us. God Himself is our soulmate, and any other relationships come second to the one we have with Him.

Because God calls all Christians to the same principles of love, kindness, and grace, any two Christians should technically be able to marry and make it work – if they walk in God’s Spirit and seek Him together. But in today’s age we have the privilege of marrying for love instead of mere practicality, and this means we can look for someone who has more in common with us than a mutual faith in God. That faith, however, should be of utmost priority. It should top the list of requirements for a spouse. And if the guy you’re dating doesn’t bow His heart to Jesus Christ, he isn’t the one for you – at least not right now (2 Cor. 6:14).

Removing the soulmate conversation gives great freedom to Christians seeking “the One”. The person you marry could be one of many different people; as you walk with the Lord and seek His wisdom, He will open your eyes to the person whose values echo yours. A Christian marriage is more about Christ working in the hearts of two people than of what substance those two people are.

His quirks will bother you.

Josh has a habit of leaving doors open where ever he goes. It drives me nuts.

I have a habit of leaving the tops off shampoo, toothpaste, and anything else that should probably keep its cap on.

If you’re waiting to marry someone who doesn’t annoy you with their quirks, you can resign yourself to perpetual singleness. Sooner or later your partner’s personal habits will bother you. It takes wisdom, strength, and grace to see past those quirks to the things that matter; the things that make marriage worthwhile.

Of course, habits and activities contrary to Scripture shouldn’t be entertained, but if the only thing holding you back from a great guy is the way he chews his food – it might be time to reevaluate priorities! While we shouldn’t go into relationships hoping to change the other person, marriage does change us. In the two years Josh and I have been married we’ve helped one another grow into better people. He has taught me compassion; I’ve taught him drive.

If you’ve seen iron sharpen iron, sparks fly when the two collide. The sharpening process involves conflict; we can’t grow without it. Josh and I frequently “bother” each other, and God knew that would be the case. But that’s why our relationship is protected by an irrevocable vow: we have committed to stick it out and fight through it no matter how hard it gets. In the process we become stronger and wiser as individuals and as a couple.

The differences in my  marriage go beyond open doors and bottle caps. As mentioned earlier, Josh and I don’t have the same hobbies, like the same music, or have any of the same interests. I could talk about history and theology for days; he’d be done after half an hour. He loves techno music and bowling, both of which I find revolting. We weren’t even attracted to one another at first. I know for a fact there were men before Josh with whom I could have “meshed” better, and I’m sure there were girls he dated who loved bowling as much as he does. By all appearances, Josh wasn’t “the One” for me, nor I for him.

Three weeks before we got engaged, we nearly broke up because of this. We weren’t sure we could get past our differences. In the end, we decided that our common vision and heart for God – if prioritized – made our music tastes and hobbies inconsequential. Techno vs. country music didn’t matter in the long run. What mattered was that we couldn’t picture life without the other person in it and when we built a life, we wanted to build it together. When you’re building something new, the former interests and priorities aren’t as important as they seem.

It might have been easier to “mesh” with someone else, but we chose one another. We each chose a person who challenged us and called us to a higher standard. The day we sealed that choice with a vow was the day he became “the One” for me – for better or for worse.

If you lack wisdom, ask of God.

Trust in the Lord with all your heart, and lean not on your own understanding; in all your ways acknowledge Him, and He will make straight your paths.

If you memorized that verse in your youth like I did, it’s easy to blow past the principles contained therein. But this simple verse answers the question, “How do I find “the One”?” The human understanding of relationships tells us we have to “try before we buy” , seeking someone tolerable and easy to live with. But no matter who you marry, there will be days of challenge and conflict. It cannot be avoided.  That’s why acknowledging God in your relationships – giving Him priority above all else – will make clear the next step in your journey.

If any of you lacks wisdom, let him ask God, who gives generously to all without reproach, and it will be given him.

These two promises from Scripture assure us that God is ready and willing to reveal His will for your marriage. You simply have to ask, wait, and acknowledge that God’s plan for relationships truly is the way of peace.