On MLK Day: What If We Listened? 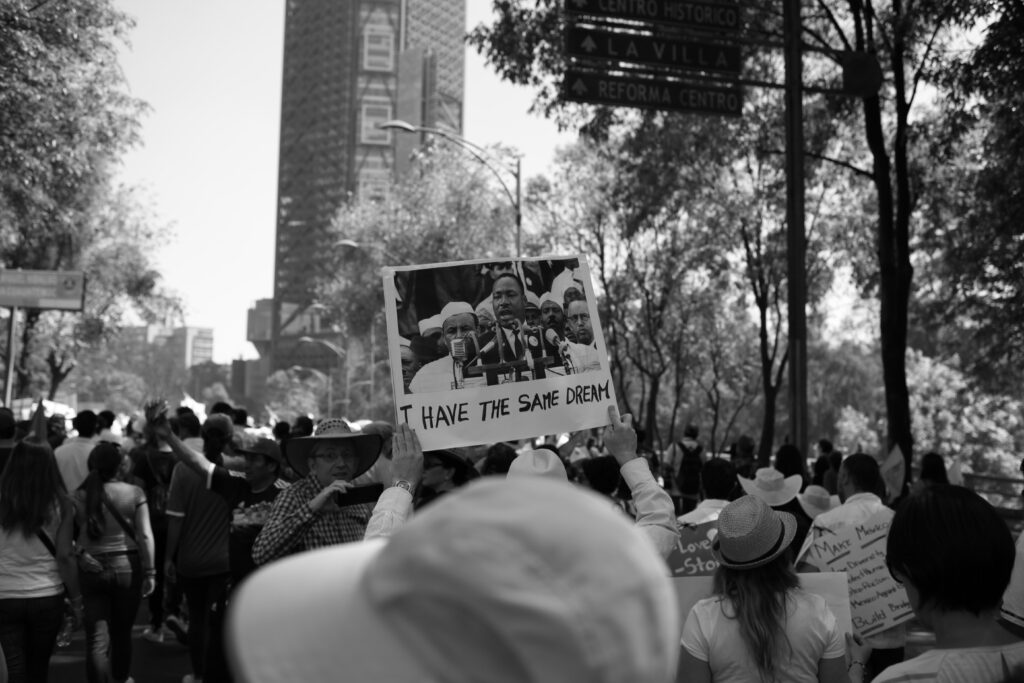 Today is Martin Luther King Jr. Day. Would you believe I spent most of my life thinking of this day only in terms of retail sales and ski resort blackout dates? I knew who MLK was (sort of) and what he did (a little) and I knew his actions were significant for black men and women. But I’m not black, so I paid little attention.

I grew up in “the great white north” and returned here after college. Northern Michigan, near Canada, was settled by the Finnish and the Polish and the German. We are 92% white. Because of this, I grew up believing racial issues irrelevant to me. Even when I went to college and gained black friends, a black roommate, their lives, concerns, and history were of little import to my experience. I didn’t see the need to pay attention because I’m not black.

I can’t forget the day my mind shifted. My husband and I were back in Lynchburg, Virginia, stopping through to say hello to my former coworkers and friends. We’d brought my one year old daughter. As a dear friend took her in his arms, she gazed with wide eyes at his beautiful black skin and I realized: She’s never seen a black person before. This led to a heavier thought: Unless I teach beyond my culture, my experience, she will not know his.

Unless I open those doors and open those books, she will spend as many years as I did thinking his experience irrelevant and mine supreme.

Some of you, by now, have assumed a lot about me. You’ve decided where I stand politically (though I have yet to make a political statement). You have labels circling between your ears: progressive, liberal, SJW. This MLK Day, I’m asking you to set those labels aside for a moment and consider what I’ve had to consider as a conservative, orthodox Christian person in racially-divided America.

What if I listened?

Race is Not a Progressive Topic

I used to think certain topics “belonged” to certain political spheres. If anything, the politics of the last four years have taught us that many of these issues can’t be pigeonholed Democrat or Republican. More and more Christians are finding the gospel drives them to care about things neither party sufficiently addresses. Further, by deeming issues that affect real people “political” we can de-personalize them. We can mock, deride, and caricature them. And once a thing has been adequately mocked and derided, we don’t have to love the people who talk about it. We don’t even have to listen.

These caricatures exist on both sides, but my audience is mostly conservative, so I’m concentrating on our cartoons. The same concept applies to progressive stereotypes of conservative believers.

Is this who you picture when someone talks about racism? Do you automatically assume the person is also pro-choice, pro-big government, pro-debt forgiveness, pro-whatever-liberal-talking-point-you-despise?

Mockery is anti-gospel. It’s not “truth in love”; it’s not even truth. It’s a means to contempt, a means to denigration, and an excuse to stop critically thinking and simply react. Conservatives pride themselves on logic and knowledge of history. This being the case, I call you up to a higher road: instead of assuming you know “what’s coming” from a person who talks about the history of racism in the U.S. and its impact on the systems therein, what if you listened?

What if people of color do have a different experience in the United States?

What if the passing of sixty years doesn’t by itself remove the winding fissures of bias in society?

The common response to discussion of race, at least among the white Christians I’ve broached this with, is “We just need to preach the gospel. Racism is a sin issue, and the gospel is the only solution to sin.”

Keller’s point is fantastic, and this is where many Christians stop, safely avoiding any further conversation around race. But how would this model work on an issue such as abortion? Should we simply repent of hatred for abortion workers and pro-choice legislators and leave things as they are? Most Christians would unequivocally say NO! We should speak up, call our representatives, march for life! We should put feet to the gospel we believe! We affirm abortion as a social evil from which our nation should be freed.

How is racism different?

Truth is: it’s not. We just don’t know (or don’t believe) the history, and we don’t want to listen.

Not only did fundamentalism fail to speak with one voice, at least in Henry’s appraisal, it rarely spoke at all. In Henry’s scathing assessment, “Fundamentalism is the modern priest and Levite, by-passing suffering humanity.” He proclaimed that “evangelical social action has been spotty and usually of the emergency type,” with the result that “Fundamentalist opposition to societal ills has been more vocal than actual.”

…Henry insisted that the root of this ethical and social crisis was primarily theological. While applauding the fundamentalist’s militant opposition to sin (as opposed to the modernist’s belief in the inherent goodness of humanity), he noted that such opposition is almost exclusively directed at “individual sin rather than social evil,” so that “a predominant trait, in most Fundamentalist preaching, is [a] reluctance to come to grips with social evils.” (Emphasis mine. Read full paper here)

It seems that in 1947 and today, “just preach the gospel” was a way to end an uncomfortable conversation. Can we change that?

How Do I Respond?

I don’t expect to change minds with this post. It took years for me to stop internally labeling people who talked about race. It took more years for me to pursue material on the topic and read it critically. It took as many years for me to see that the gospel is not threatened by its own impact on social issues. And it took those same years for me to see that not all black people talking about race fall in line with either Rachel Cargle or Candace Owens. There is a great harmony of voices speaking to this topic from the belly of church itself; people calling Christians to just listen. Just read. Consider that there are viewpoints within orthodox Christianity that speak to very real issues of race in today’s America.

Action can’t be taken by people who think action shouldn’t be taken. This is why so many conservative Christians stand still, or walk away, when racism is broached. Can I encourage you? Rather than react, rather than argue, rather than comment how wrong they are (or I am) – would you take the time to research and read, especially from sources that aren’t in your quiver? Before sending the volley of refutation, perhaps we should better learn the “opposing” argument. Rather than hunting for a critical race theory that many do not even fully understand, read the works of faithful Christians who can speak to these things.

There are many, many voices who have written and spoken and worked to teach about race in America for years before critical race theory became the buzzword to shut our ears and shut them down.

Jasmine Holmes, one such resource, says this:

…Generally, it’s discomfort that keeps us from digging into any hard truth. We don’t want to talk about slavery anymore, because it’s “dwelling in the past.” Frederick Douglass was needed back then, but we think we’re all good now.

It’s true that, because of the foundation built by Douglass and others, black Americans have overcome so much more than we ever thought imaginable. Because he was bold enough to separate himself from the hypocritical Christianity that surrounded him, he challenged America to live out the implications of the gospel that they claimed to prize.

In many ways (though not in all), we are fighting completely different battles than Douglass was. But even still, we are fighting them standing high upon his shoulders… Because, yes, like Fannie Lou, and Frederick before her, we will speak up. (read the rest)

You might not be ready to speak up. You might be – still! – picturing me like the meme above. So be it. My job is to make people think from a gospel foundation.

Martin Luther King Jr. said in a letter to the Atlanta Constitution in 1946:

“I often find when decent treatment for the Negro is urged, a certain class of people hurry to raise the scarecrow of social mingling and intermarriage. These questions have nothing to do with the case. And most people who kick up this kind of dust know that it is simple dust to obscure the real question of rights and opportunities. We want and are entitled to basic rights and opportunities of American citizens… equality before the law; some of the same courtesy and good manners that we ourselves bring to all human relations.” (Autobiography of MLK, page 15)

If you read that and want to say, “They already HAVE decent treatment, equality before the law, courtesy and good manners!” I encourage you to listen. Listen to the experiences and stories of your black friends and acquaintances. Read their work. Read their history.

It’s easy to kick up dust. It’s harder to choose quietness and let it settle.

The authors I have linked in this article are specifically chosen for their Christian affiliation. Another list, not updated and not all Christian, are listed here.

For a podcast interview on racism, see here.

← Are We Part of Esther's Anointing? How to Really Love Your Child →
0
0
Your Cart
Your cart is emptyReturn to Shop
Continue Shopping