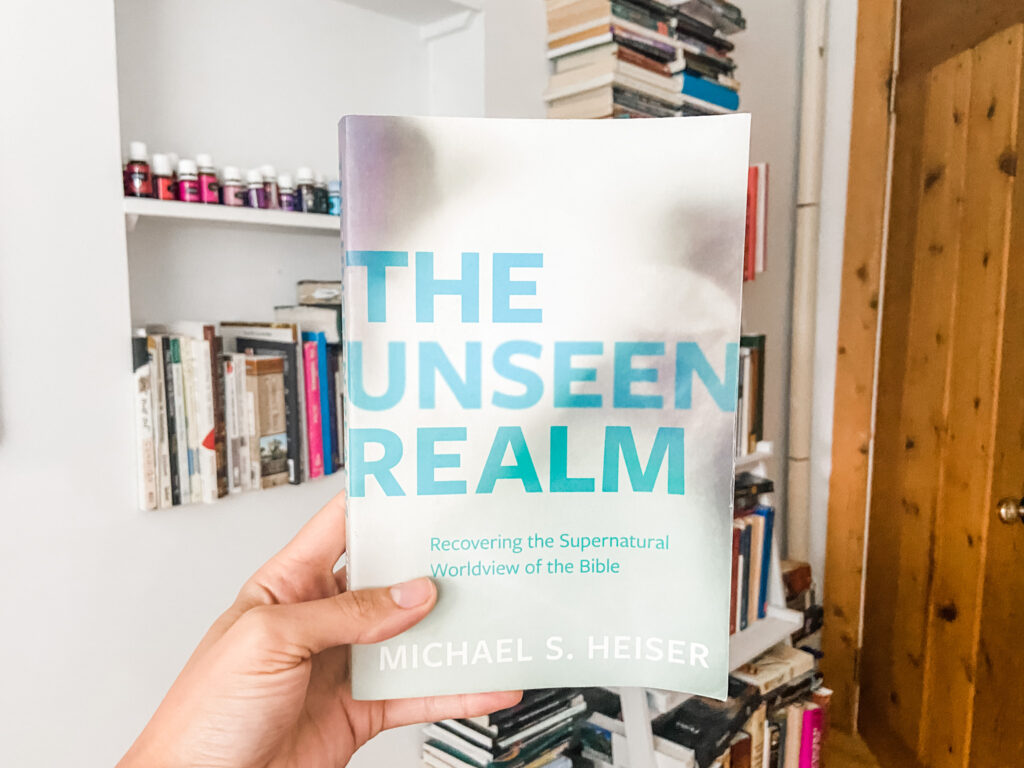 It took me the better part of six months to finish this book – one I’ve been asked repeatedly to review. While I usually like to buzz through books as quickly as possible, I’m glad I took the time to read this one slowly and take in the arc of history and analysis that Dr. Heiser provides.

Dr. Heiser is a scholar, historian, teaching/theology pastor and host of The Naked Bible podcast. He is a prolific writer; The Unseen Realm is only one of many books he has written on the topics of angels, demons, the supernatural realm and more. The “light” version of The Unseen Realm – designed for the lay person – is called Supernatural. While I’m sure that one is great, I would recommend reading the original, “unabridged” approach in The Unseen Realm. You’ll see why in a moment.

I was thinking about how to summarize this book. So much is going on, so much is addressed, so much knowledge and history is compiled in its pages I have a hard time deciding how to tell those unacquainted with the book what it’s all about. My best description is this:

The Unseen Realm is a book describing the spiritual battle that undergirds the historical narratives we see in the Bible, especially the Old Testament, clues of which can be found in the themes, terms, and places referenced in the text. When you know those themes, terms, and places, you understand what the authors were implying and the spiritual view of the world they had. Instead of “spiritual warfare” being that random topic for the charismatic uncle at Thanksgiving, it’s an essential study for understanding the biblical story and our part within it.

Or as the back of the book puts it:

“In the Unseen Realm, Dr. Michael Heiser examines the ancient context of Scripture, explaining how its supernatural worldview can help us grow our understanding of God. He illuminates intriguing and amazing passages of the Bible that have been hiding in plain sight. You’ll find yourself engaged in an enthusiastic pursuit of the truth, resulting in a new appreciation for God’s Word.”

Because The Unseen Realm is addressing the entire arc of biblical history, its conclusions touch on almost every theological topic within Christianity: sin, anthropology, Christology, salvation theology… the spiritual realm has implications across them all. The “big picture” Heiser paints gives a helpful backdrop to these more niche theologies. At the same time, you’ll want to have a solid understanding of basic Christian theology to appreciate what he’s saying (an issue I’ll address in the next section).

There were times, when reading, I felt like I’d cracked The Silmarillion instead of a book about ancient Israel, and some of Heiser’s conclusions gave me pause. Then again, he is the expert on ancient Sumeria, not me, and my hesitancies were largely based in a lack of similar content from other scholars. I was reassured by the endorsement from Tremper Longman, a scholar I deeply respect whose work on the Canaanite conquest and Passion translation have proven his mettle. He says of The Unseen Realm:

“This is a ‘big’ book in the best sense of the term. It is big in its scope and in its depth of analysis. Michael Heiser is a scholar who knows Scripture intimately  in its ancient cultural context. All – scholars, clergy, and laypeople – who read this profound and accessible book will grow in their understanding of both the Old and New Testaments, particularly as their eyes are opened to the Bible’s unseen world.”

The book is divided into seven parts:

If you’ve recently read through the Bible chronologically, this book will help unite the two testaments even further. Particularly helpful is Heiser’s approach to the unseen, spiritual realm as the ultimate link between the perceived “angry” God of the OT with the “loving” God of the New. Each section of The Unseen Realm will be most helpful if you’ve read Genesis and Revelation (everything in between is important too, but I found the themes in these two books came to life as I read Heiser’s work).

One of the most curious things addressed by Heiser is the nature of the Nephilim in Genesis 6. These giant pre-flood warriors are described as the offspring of “the sons of God” with daughters of men (Lord of the Rings vibes, anyone?). Most scholars believe the term “sons of God” simply described evil sons of Seth. Heiser argues these were demonic spirits, whether inhabiting a human body or on their own.

From what I can discern (based on Dr. Heiser’s interpretation of key passages) this book comes from a provisionist (as opposed to Reformed/Calvinist) perspective.

Perhaps the most disappointing thing for me – not about the book, but about people’s use of it – is how so many readers focus on the tiny portion about the Nephilim instead of looking at this book as a whole. Heiser’s treatment of Babel/Babylon, the themes of exile and captivity, the concept of territorial demonic activity and the significance of covenants are far more important and powerful, but these concepts get lost in the excitement over giant demon babies. I suppose that’s just the nature of things; giant demon babies would be a sight. I just hope future readers will take note of the bigger picture issues as well.

This leads to my biggest caution with The Unseen Realm: Think before you recommend it. I found The Unseen Realm immensely helpful for understanding the role of the spiritual realm in the salvation story, for grasping why Israel functioned the way it did, for explaining the Canaanite conquest, and much more. But I read it as someone well-versed in the biblical narrative. I think, if I were a young believer, this content would not have bolstered my faith so much as distracted me from it. The last thing a new believer needs is to get in the weeds on demons, angels, and the sons of Seth without first grasping salvation theology, sanctification, and the basics of a gospel centered life.

Before recommending The Unseen Realm, I would ask these questions:

I realize these are very specific questions but I think they need to be; recommending a resource that shapes someone’s view of God is a responsibility. We should take that responsibility to heart. The Unseen Realm would be a great addition to the library of a mature believer, ministry leader, or Christian writer, and it answers many questions about the Bible. But it can also lead to unnecessary rabbit trails if introduced too early in a believer’s walk.

This said, if you’re curious about the Nephilim, that passage is very helpful for understanding the symbolism of Babylon in the prophets and in Revelation! Pages 105-108 describe the role of the apkallus in Babylonian demonology. I think you’ll see some profound implications on early Gnosticism and the modern New Age movement as you read.

In conclusion: I think this book is a must-read if you’ve been a Christian a while, have questions about the spiritual realm, and – particularly – are still a bit confused about the nature of God and Israel in the Old Testament. If I could suggest a pairing (I sound like a sommelier. Could that be a thing? “Book Sommelier”?), I would read this on the heels of Mere Christianity by Lewis and If God Why Evil? by Geisler.

← Ask Anything Q&A: Hell, Sabbath, Revelation & Women Ministers Seven Views of the Atonement →
0
0
Your Cart
Your cart is emptyReturn to Shop
Continue Shopping