I Kissed Dating Hello: Why Christian Girls Are Done With Courtship Culture 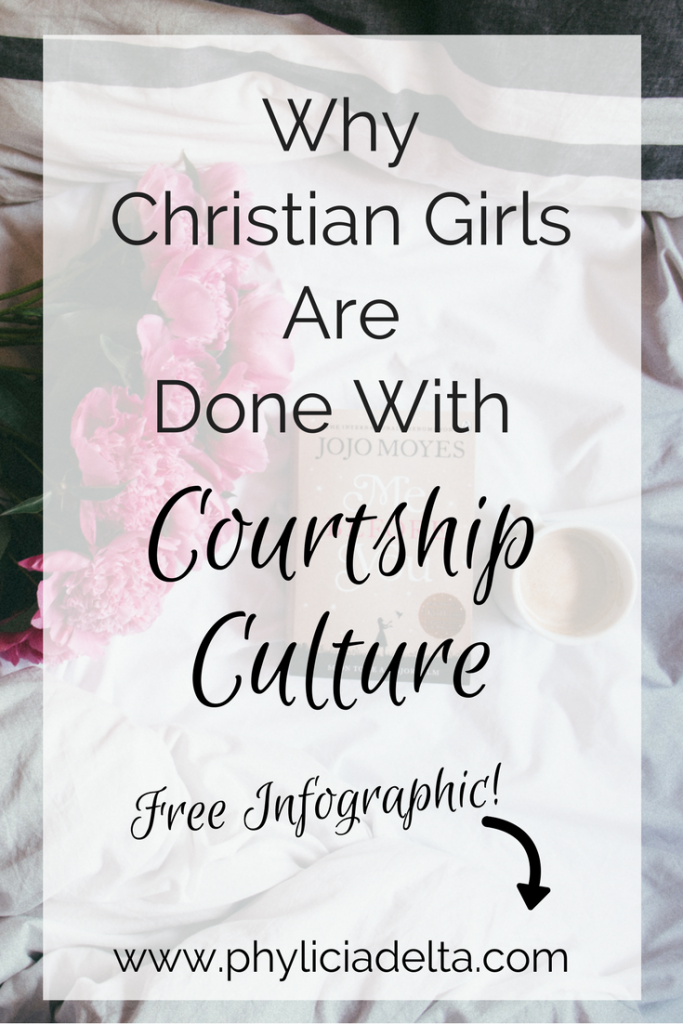 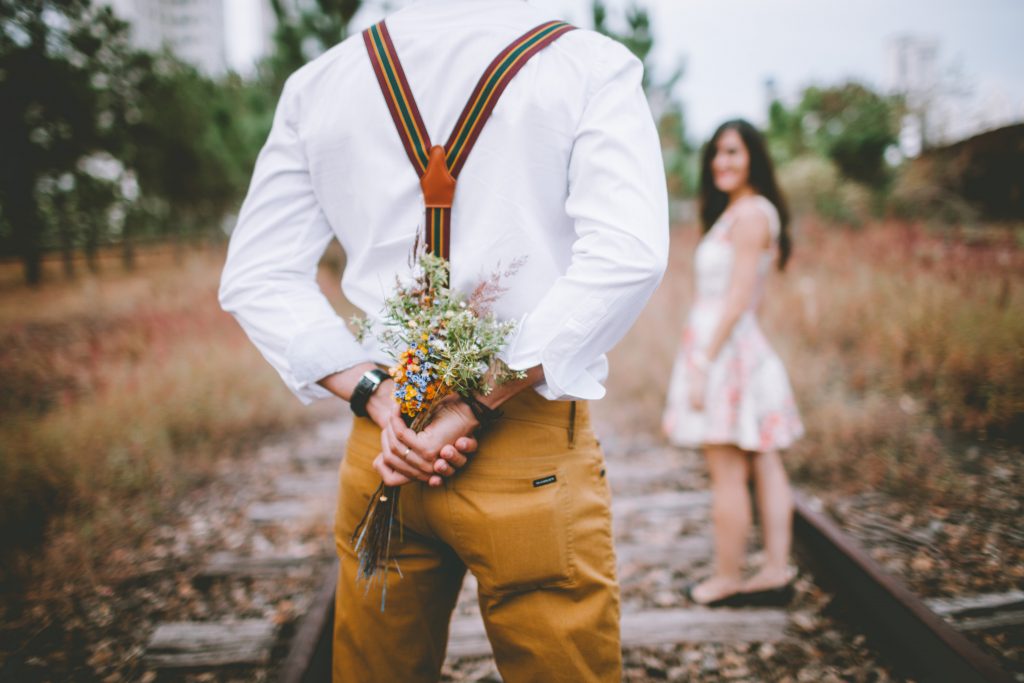 “I don’t date, I court.” The girl sniffed, her ankle length skirt swishing as if for emphasis.  She felt a keen sense of superiority to her peers – those “Christians” who had no real standards for relationships. They were to her some kind of relational bourgeoisie, no different than the rest of society, and quite content to be so.

Her awkwardness and undesirability – particularly in comparison to her trendier peers – made her all the more dependent on her “superior” worldview. It was her comfort; her way of protecting herself from the other girls. She didn’t know how to strike the balance of dating and purity, so she didn’t try. She immersed herself in courtship culture, where women got married at 18 and chaperones were normal and everything was better. She had her people. She had her viewpoint. One day she’d have a husband. That’s what mattered… right?

That girl was me.

At no fault to my parents – who actually did not encourage the culture in which I immersed myself – I read every book on courtship I could get my hands on. By eighteen, I had fenced myself in with an ideology without a thought to its impact on my life at large. All I cared about was getting married. I didn’t know what else I wanted out of life. I had my pride, my dream, and thick veneer of legalism to protect them both.

And at twenty-one years old, I realized just how empty it all was. I’m not the only one: I get emails every week from women, asking: “How do I find purpose if I was raised only to get married?” “How do I rid myself of the guilt for dating instead of courting, even when I’m being completely pure?”

This post is not anti-courtship. I am a strong advocate for intentional dating; I have dozens of posts articulating the who, what, and why of God-honoring relationships. This post is about courtship culture. The difference? Courtship itself can look a dozen different ways; the terms “intentional dating” and “courtship” can even be used interchangeably. But courtship culture is a Christian subgroup defined by its specific approach to relationships, which usually includes a patriarchal family model, a focused approach to marriage, and strict physical standards.

What’s wrong with those three things? Nothing, actually. In fact, every Christian relationship should reflect those three values to a degree. Why then are so many Christian girls done with courtship culture? Why do more and more Christian women feel betrayed by an ideology that began with such good intentions?

The dating model that emerged in the 1920’s was largely a reaction to the strict confines of the Victorian model. Chaperones and parlor courting rituals gave way to to a world where men and women could go out together, alone, even in a car. By the 1960s, dating was normal – and combined with the spirit of the sexual revolution, it became the vehicle for physically-focused, non-committal relationships, most of which were never headed toward marriage. It is because of this kind of dating that courtship culture – which gained traction in the 1980s – emerged.

Courtship addresses a real need: a need to resist the sexually promiscuous, non-committal dating model. But that need is addressed the wrong way, because courtship culture ignores the root of the problem: human nature. In haste to separate from the sinful spirit of our age, courtship culture swung to an extreme that lacks biblical precedent and historical understanding.

The Victorian Model Is Wrongly Idealized

What do I mean by “historical understanding”? Courtship culture spends a lot of time looking back, celebrating a time when women were virtuous, men were chivalrous, and children obeyed their parents in all things – including the pre-marriage ritual. The problem? This time has never existed.

The Victorian model of relationships is the general structure of modern-day courtship: the man expresses interest to the woman’s family, particularly her father. He is then permitted to visit the daughter in the confines of her home accompanied by a chaperone or sibling. Later on they might be able to go for walks or outings – once again chaperoned. The relationship is intended for marriage from the beginning.

The part no one likes to talk about is just how secretly debased Victorian culture could be. The veneer of purity, glamorized by time, was a largely a facade. Human nature was the same then and now; cultural constructs might have hidden it, but they did not prevent sin from happening. The Victorian model, like the modern courtship model, only works when hearts are in line with the virtue of Christ.

Courtship Culture Is Reactive, Not Proactive

Because courtship culture is a response to a social problem, it is largely reactive. Rather than begin with the spirit of the man and woman, it regulates purity from the outside in. This puts courtship perpetually on the defensive against a cultural sexual ethic.

Purity and honor cannot be forced. They are products of transformed hearts. Courtship went wrong when it strove to regulate young women into obedience. It created a construct for purity; a framework where virtue could be achieved and sin could be prevented. Yet it its effort to facilitate God-honoring relationships, it failed to start with the most important element: hearts that want to honor God. Courtship culture was behind in the battle from the very beginning, and Christian girls see that.

Courtship culture’s focus on virtue is rooted in biblical principles, but there are many unbiblical aspects to it as well. For example, extreme courtship models put primary focus on the father’s “hand off” of a daughter to her husband. Some families believe it is borderline sinful for a daughter to move out of her parent’s house prior to marriage; that working outside the home, or for anything other than the family business, is an acceptance of the post-sexual revolution feminist ethic.

Let me make this clear: I do not subscribe to modern feminist ideology. What I have to say here is based strictly on study of Scripture and the historical context around it. That said, Christian girls struggle to let go of courtship’s ideals because they seem slightly biblical – and they are. It is true that we are called to honor our parents, to respect our fathers, and to celebrate the father-daughter relationship modeled by God Himself. But nowhere in Scripture do we see a mandate for women to be kept under the reign of their father until a husband appears on the scene. This is a cultural construct, not a biblical one.

It would be easier if God intended us to regulate our children into obedience and purity. But keeping daughters home and regulating all their male interaction will not change their hearts. The sins of modern dating don’t begin with sex. They begin with pride. The sins of courtship culture are exactly the same.

God’s treatment of women always upset cultural constructs, and it never centered around fear or pride. Much of what we see in courtship culture today is fear-driven parenting, the pride of “separatist” subculture, and a new, reactive cultural construct to replace the faulty one. Christian girls are done with it, not because we are rebellious – but because we know God has more for us than this.

Here’s the truth: courtship culture needs fear and pride to exist, because it refuses to acknowledge the role of God’s Spirit.

Christians possess all the power of God to pursue His holiness in their lives. On our own, we could never achieve virtue and honor. But by walking according to the Spirit of God in us, His character is manifested in ours. Courtship culture has ignored the role the Holy Spirit plays in relationships, and has taken up the mantle of the Spirit for itself. And like most pseudo-Holy Spirits, it doesn’t do a very good job.

We can set up physical standards,  have chaperones, and be as “intentional” as we like, but if the Spirit of God is not alive and active in our hearts, we can find sin. Purity is not a list of outward actions. It is an inner change of desire and priority.

The framework of courtship may have some good ideas, but it’s not the only way to honor God in relationships. And the couple who dates according to the Holy Spirit’s work in their hearts is better off than the one who courts according to fear, pride, or social expectation.

You Were Created for a Relationship… With God

I spent most of my teen years expecting nothing more out of life than to get married. The books I read talked about marriage as the “magnum opus” of a woman’s life: her ultimate calling of wife and mother. I am now both those things. It is indeed an honor to fill these roles, but they are not my ultimate calling. They are not my identity.

That’s why it’s time to be okay with never getting married, because we can’t control that outcome. It’s time to smash the idols – even those erected in honor of good things – tear down the fences we’re using to “get holy”, and let God work transformation in our lives. It’s time to embrace a relationship with the Holy Spirit that is alive and active, and to let His Spirit saturate our romantic relationships. It’s time to embrace a purpose far more eternal than an earthly covenant, and to live out the Great Commission in work, love, and home.

Courtship doesn’t have a corner on the market of commitment and virtue. These are characteristics of God Himself! It is by walking in humility and love for God that we manifest these attributes in our relationships. Because of this, it is as possible to honor God by dating as it is by courting.

I do not look back on my courtship days with bitterness, but I do look back on them with regret. I spent more time elevating my ideology and myself than I spent elevating God. I was more concerned with doing relationships “the right way” than with manifesting the Spirit of God in those relationships. In leaving courtship culture, I discovered a powerful truth: love is a risk. It’s always a risk. There is a risk a relationship will end, will not work out toward marriage, and that’s okay. It’s possible to honor God on a date, alone with a guy, in a car, or without a chaperone – if your heart longs to obey God. (Read how here)

There aren’t just two options for Christian relationships: courtship or the world’s way. There’s a third way. It’s the Spirit-led relationship, held to standards rooted in love for God, not human law.

Christian girls are done with courtship because they’re ready for trust. They’re ready to put trust in God, not in an ideology, and to be trusted by the church. In that place of trust is a glorious freedom: the freedom to be holy. It’s a risk to choose holiness at every opportunity. But when we do, abundant life comes near and we grasp what Jesus meant when He said: “If the Son sets you free, you will be free indeed.” (John 8:36)

← The Millennial Gospel: Jesus, Tell Me More About Me How to Choose a Word of the Year →
0
0
Your Cart
Your cart is emptyReturn to Shop
Continue Shopping