Your Parenting Method Won’t Save Your Kids – Grace Will

We’re Christians. We believe the message that it’s not by works of righteousness, but according to his mercy he has saved us, and we’ll all say amen to that. However, I know that I’m not the only one that’s bought into the lie that I have to parent by a certain method in order to get the right results in my kids.

In other words: My works are going to save my children, as if that’s my responsibility. If I know more, if I train harder, if I pray enough times the ‘right way’, somehow it’ll keep them from being messed up, but the reality is that my kids are going to end up messed no matter what I do. I could parent 100% perfectly, but I can never parent the sin nature out of them.

So because of that I no longer have to worry about producing perfect humans, because I can’t. My sacrifice to God doesn’t have to be perfect children, but instead my sacrifice needs to be my pride, giving up what I think I can and need to do, and instead presenting my children before him, knowing that where my failing and shortcomings miss (and they will) he will be the perfect parent to them, just as he is to me.

When I look at my Father, the maker of everything, and realize that a good and perfect God who can do no wrong sees worth in me, someone who can’t help but do wrong, it changes everything. The same guidance and grace he’s given to me, I want to show to my kids. I don’t want to present a set of rules they need to follow in order to turn out the right way, but instead that they have value simply because God loves them and wants the bests for them.

In every way that he’s guided and loved me, revealing his good and loving nature, he will reveal that to them if they’re open to it. I love them, but he loves them more. All I need to do is show them who he is by admitting I need him. Running into his arms. Leaning on his grace. Reading and committing biblical truths to my life. Praying the fruits of the Spirit will grow in me. Listening to the Holy Spirit. And trusting that Christ’s sacrifice was enough.

I hope this touches something deep in you. I know it changed everything for me. Because my message in all this for you is that if God’s grace is enough for you, it’s enough for your kids as well.

I’m not saying to cease trying to become a better parent, but instead that you no longer need to strive to do it under your own power. His power is enough.

His grace is enough.

Trust him to help you in everything. It’s not by your strength, but his. He knew what he was doing when he made you their parent. He sees all your shortcoming and failures, and he still trusted you with this job for a reason. A parenting method won’t guarantee anything, but leaning on God will guarantee everything.

Let God reveal where you need to be a better parent, because he will. He always honors that prayer. It might hurt to drop the rules and façade and instead see where you are imperfect and need help. I can promise you, though, that so much growth will come through it that you’ll one day look on the other side, and be able to tell your children how God used them to make you a more sanctified person.

Let Them See You Leaning

So I guess my call in all this is to just lean on God. He’s who you need, and who your kids need, and them seeing you lean on him will do more for them than breastfeeding for four years or getting them to sleep through the night by four weeks or eating only organic food will ever do.

They need his grace, and that’s a beautiful thing.

HALI SMITH is a wife and mom of two while also finishing a degree in accounting. When she isn’t studying or spending time with her family, she enjoys traveling, studying child development and typing her friends on the Enneagram. You can follow her on Instagram at @halimaespublic 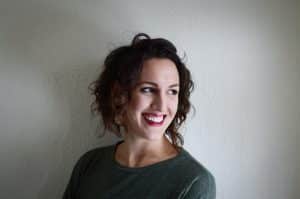